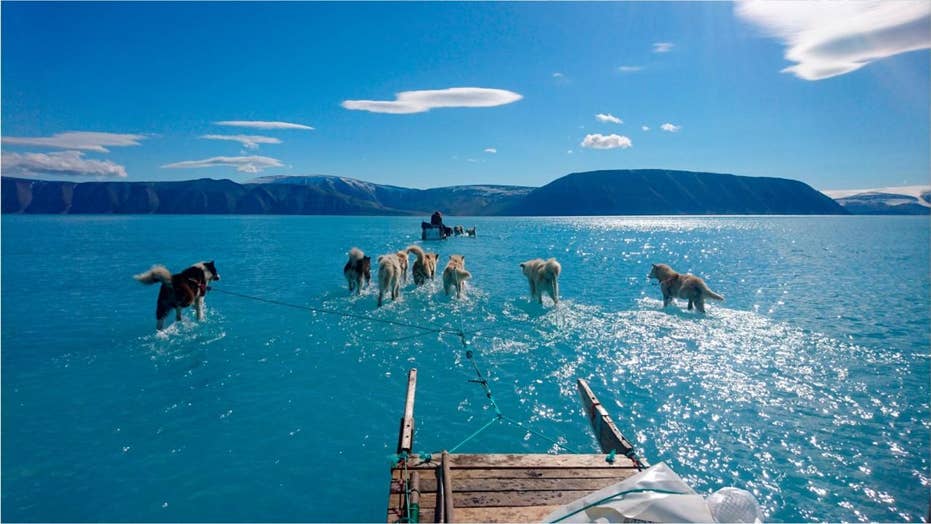 Danish meteorologist Steffen Olsen snapped a mesmerizing photo of his band of sled dogs walking on thin ice, across a frozen sea that has become flooded with melted glacial waters. Olsen was making the trek through northwest Greenland along the Inglefield Gulf, which is normally covered with ice and snow, but was flooded with running water from the melting Greenland ice sheet. Experts say the image is indicative of the planet’s climate crisis.

Danish meteorologist Steffen Olsen and his band of sled dogs are walking on thin ice — across a frozen sea that has become flooded with melted glacial waters.

Olsen was trekking through northwest Greenland last week to recover tools used by scientists at the Danish Meteorological Institute to track ocean and weather changes — but he couldn’t find them. Unfortunately, the Inglefield Gulf on which he traveled, usually icy and covered in snow, was flooded with running water from Greenland’s melting ice sheet.

The mesmerizing photo Olsen snapped on June 13as they waded over the splashy ice sheet gives the illusion that his dogs are walking on water — but it’s anything but a trick. Experts say this image is indicative of the planet’s climate crisis.

“@SteffenMalskaer got the difficult task of retrieving our oceanographic moorings and weather station on sea ice in North West Greenland this year,” wrote Olsen’s colleague Rasmus Tonboe via Twitter, while sharing the incredible photo. “Rapid melt and sea ice with low permeability and few cracks leaves the melt water on top.”

NASA SNAPS STUNNING PICTURE OF ASTEROID BENNU FROM ONLY 0.4 MILES AWAY

Sled dogs make their way in northwest Greenland with their paws in melted ice water. (AP)

At the same time Olsen took this photo, news broke that Greenland has suffered a loss of two billion tons of ice already this season — about 40 percent of their nation’s icy expanse. While the country experiences annual melting from June through August, the rate so far this year has been record-breaking.

“The high melt is unusual so early in the season but not unprecedented,” tweeted @GreenlandIceSMB, the surface mass budget committee of Greenland’s Polar Portal, under the Danish Ministry for Energy, Utilities and Climate.

Experts point out a snowball effect when it comes to early season melting. Ice and snow are a lot better than water at deflecting the sun’s rays, preventing heat absorption. Less ice on the ground means increased melting as heat more easily penetrates the surface of the water.

Olsen himself is calling for immediate action: “Communities in #Greenland rely on the sea ice for transport, hunting and fishing. Extreme events, here flooding of the ice by abrupt onset of surface melt call for an increased predictive capacity in the Arctic.”