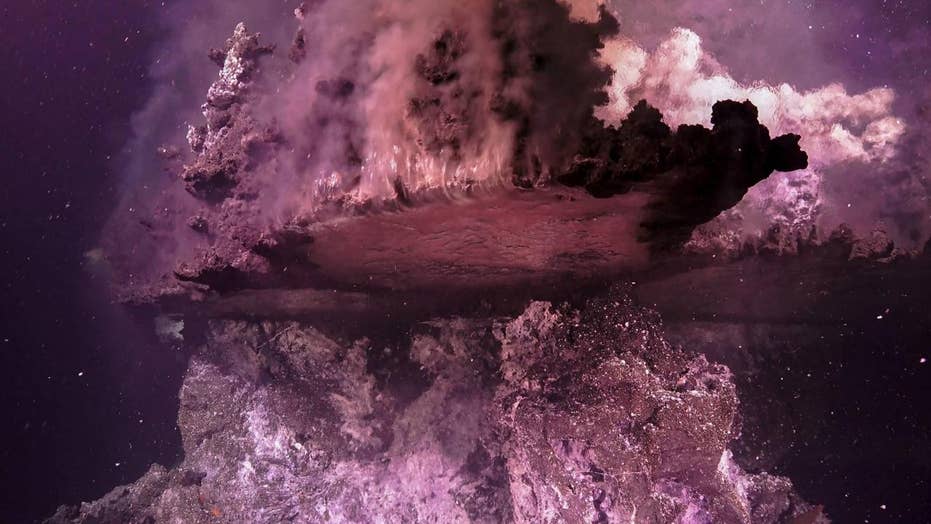 Scientists have discovered a strange and mesmerizingly beautiful space thousands of feet below the ocean's surface.

The otherworldly ecosystem features 75-foot towers containing volcanic flanges that create the illusion of looking at a mirror when one observes the super-hot hydrothermal fluids beneath them. The gorgeous visuals provide a rare window into a world that looks like something cooked up by James Cameron for the "Avatar" sequels.

Scientists aboard the Schmidt Ocean Institute's research vessel Falkor made the discovery during an expedition to study hydrothermal and gas plumes more than 6,500 feet below the surface of the ocean in the Gulf of California.

A deep-sea octopus is seen with ROV SuBastian reflected in its eye. (Courtesy of Schmidt Ocean Institute)

"We discovered remarkable towers where every surface was occupied by some type of life," Mandy Joyce, a marine scientist from the University of Georgia, said in a statement. "This is an amazing natural laboratory to document incredible organisms and better understand how they survive in extremely challenging environments."

Even so, Joyce noted that researchers still discovered human-generated trash even at that depth, including fishing nets, deflated balloons and a discarded Christmas tree.

"This provided a stark juxtaposition next to the spectacular mineral structures and biodiversity," Joyce added.

Joyce and her team at the Schmidt Ocean Institute used a range of high-tech tools for their research, including 4K deep-sea underwater cameras and sediment samplers, working via a remotely operated vehicle called ROV SuBastian.

ROV SuBastian picks up some discarded trash near Big Pagoda vent in the Guaymas Basin. (Courtesy of Schmidt Ocean Institute)

"It's a different world down there. Each dive feels like floating in a science fiction film," Schmidt Ocean Institute Co-founder Wendy Schmidt said in a statement. "Witnessing these remarkable oceanscapes, we are reminded that although they are out of our everyday sight, they are hardly immune from human impact. Our hope is to inspire people to learn more and care more about our ocean."

The team will spend the next few months analyzing samples that were taken before they publicly release their findings.