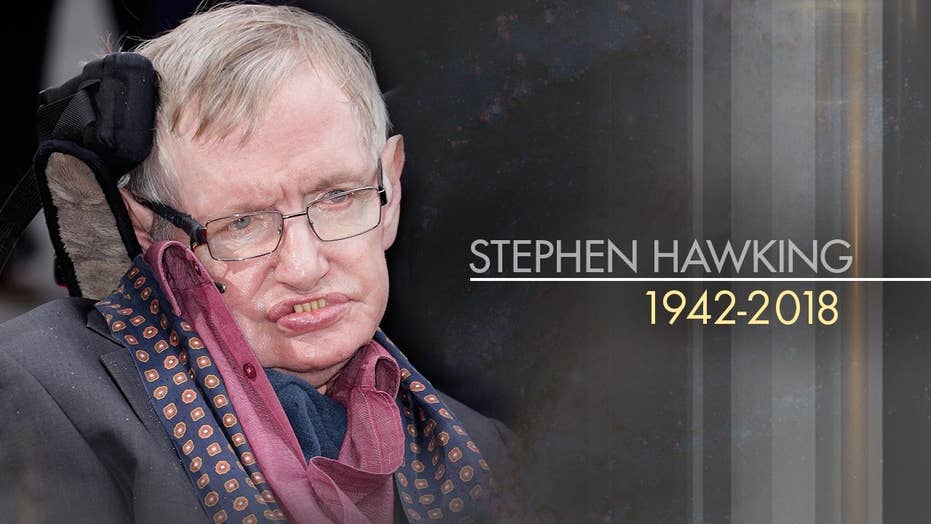 Tributes are pouring in for famed physicist Stephen Hawking, who died early Wednesday. He was 76 years of age.

In a tweet, NASA praised Hawking’s huge contribution to science. “His theories unlocked a universe of possibilities that we & the world are exploring. May you keep flying like superman in microgravity, as you said to astronauts on @Space_Station in 2014,” it wrote. A video accompanying the tweet showed Hawking talking to astronauts Rick Mastracchio and Koichi Wakata aboard the International Space Station in 2014.

Famed for his work on cosmology, black holes, and the basic laws of the universe, Hawking was among the most recognizable faces in science. His 1991 work “A Brief History of Time” became a global best seller.

The European Space Agency also paid tribute to the theoretical physicist. "'Space, here I come'- remembering world renowned physicist Stephen Hawking, who showed us there are no limits to achieving our dreams. Our thoughts are with his family," it tweeted.

Hawking owed part of his fame to his triumph over amyotrophic lateral sclerosis, or ALS, a degenerative disease that eats away at the nervous system. When he was diagnosed aged only 21, he was given only a few years to live.

Also known as Lou Gehrig's disease after the New York Yankee star who died of it, ALS usually kills within three to five years.

ALS is known as Motor Neurone Disease in the U.K. The Motor Neurone Disease Association lauded Hawking’s huge contribution to raising awareness of the disease Wednesday. “Our thoughts are with Professor Hawking’s family,” it wrote. “Throughout his inspirational life Professor Hawking played a vital role in raising awareness of motor neurone disease around the world.”

The organization saw such a surge in donations following Hawking’s death that its website crashed Wednesday.

As one of Isaac Newton's successors as Lucasian Professor of Mathematics at Cambridge University, Hawking was involved in the search for the great goal of physics — a "unified theory."

A 2014 biopic, “The Theory of Everything,” depicted the courtship, marriage and eventual separation of Hawking and his first wife, Jane. Directed by James Marsh, the movie starred British actor Eddie Redmayne, who won an Oscar for his portrayal of the celebrated physicist.

Redmayne paid tribute to Hawking Wednesday. "We have lost a truly beautiful mind, an astonishing scientist and the funniest man I have ever had the pleasure to meet," he said, in a statement obtained by Mashable.

A LOOK BACK ON THE LIFE OF RENOWNED PHYSICIST STEPHEN HAWKING

In a tweet British Prime Minister Theresa May described Hawing as an inspiration to others. “Professor Stephen Hawking was a brilliant and extraordinary mind - one of the great scientists of his generation. His courage, humour and determination to get the most from life was an inspiration. His legacy will not be forgotten,” she wrote.

Hawking was inducted into the Royal Society in 1974 and received the Albert Einstein Award in 1978. In 1989, Queen Elizabeth II made him a Companion of Honor, one of the highest distinctions she can bestow. Awarded the Presidential Medal of Freedom in 2009, he was also a member of the US National Academy of Science.