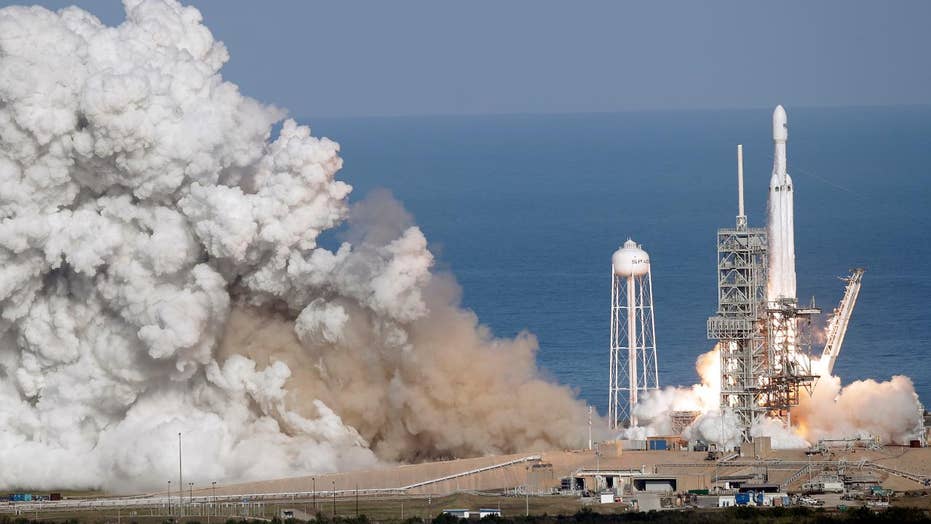 Known for big statements and bigger bets, as well as spectacular surprises and failures, SpaceX's Elon Musk is attempting his biggest – or heaviest – venture yet. He is launching the world's most powerful rocket, the Falcon Heavy.

Containing 27 engines, the rocket will have a thrust able to generate more than 5 million pounds, akin to the equivalent of 18 Boeing 747 aircraft. It will be able to lift a payload of more than 64 tons (141,000 pounds) into orbit, twice as much as the Delta IV Heavy, at one-third the cost, according to SpaceX.

The only payload in history to have a larger size was the Saturn V moon rocket, which last flew in 1973.

The first flight is set for 1:30 pm EST on Tuesday from Launch Complex 39A at Kennedy Space Center in Florida. SpaceX said that when the rocket achieves liftoff, "it will be the most powerful operational rocket in the world by a factor of two."

The company added that "Falcon Heavy’s side cores are flight-proven — both previously supported independent Falcon 9 missions in 2016."

Musk, who in addition to leading SpaceX also heads up electric vehicle maker Tesla, said the payload for Falcon Heavy would be a Tesla Roadster and a dummy pilot, code-named Starman. The Roadster will aptly play David Bowie's song of the same name.

Extra batteries have been installed in the car to keep the music playing for an undetermined amount of time. Three cameras are also onboard the car, which Musk said “should provide some epic views.”

The event is expected to have intense interest, with nearly 100,000 spectators set to watch the historic launch on Florida's Space Coast. That would make it the largest crowd lining the beaches since the space shuttles retired.

PARIS HILTON IS A HUGE FAN OF ELON MUSK

The purpose of testing Falcon Heavy is simple — it was designed to bring astronauts into space and potentially send a crew to the Moon, Mars, an asteroid and beyond.

During Monday's press conference to discuss the launch, Musk said “it would be a pretty huge downer if it [Falcon Heavy] blows up," but added that he wasn't too concerned about the possibility.

"I feel giddy and happy, actually," Musk said. "I’m super-confident we’ve done everything we can to achieve maximum success of this mission.”

Musk also tweeted out an animated video of what a successful flight of the Falcon Heavy would look like.

The space vehicle has three first-stage rocket boosters and after it's launched, SpaceX will attempt to bring all of them back for re-use. SpaceX has done this previously with its Falcon 9 rocket, but that only has one first-stage booster and is a much smaller rocket.

If successful, the two side boosters will land back at Kennedy, while the center booster will land on a droneship in the sea.

Generating excitement around the world

Musk has cautioned that much can go wrong with the Falcon Heavy, but the world is waiting with bated breath to see what happens. Even the competition is cheering Musk and SpaceX on.

Musk responded by saying "Thanks," playfully adding a kiss-face emoji.

Though the mission has generated excitement for potentially sending a payload to Mars, that's not actually the case.

The second stage of Heavy will fire three times and put it on an elliptical orbit around the Sun that extends out as far as Mars. There is an "extremely tiny" chance it could crash into the Red Planet, Musk said in comments obtained by The New York Times, but that is unlikely to happen.

If the Falcon Heavy launch is successful, it will mark the beginning of a very busy schedule for the space vehicle. Later this year, it is scheduled to launch a communications satellite for a Saudi Arabian satellite operator, Arabsat. It is also scheduled to launch a test payload for the U.S. Air Force as soon as June, allowing the branch of the U.S. military to determine whether the Falcon Heavy is capable of launching national security payloads.

It's also scheduled to send other satellites into space, including one for Viasat and another for Inmarsat, which has previously used SpaceX to launch satellites, according to Space.com.

If the launch is unsuccessful it could damage the company's reputation, and raise questions about Falcon Heavy's ability to handle regular spaceflight.

SpaceX will stream the mission live on its YouTube page and Fox News will do the same on its Facebook page.

Fox News' Phil Keating contributed to this story. Follow Chris Ciaccia on Twitter @Chris_Ciaccia. Updated to note the dummy pilot is nicknamed Starman, not the Roadster.