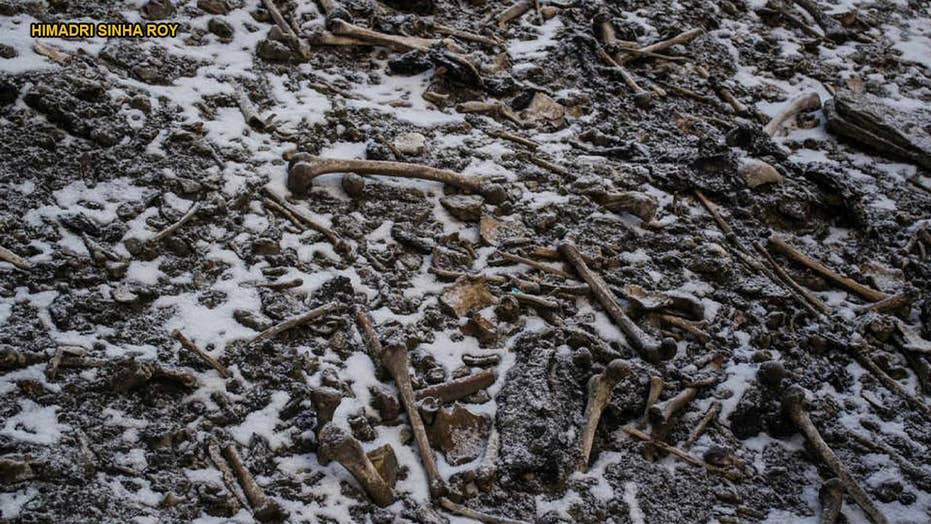 In 1942, hundreds of human skeletal remains were discovered at Roopkund Lake, which is 16,499 feet above sea level deep in the Indian Himalayas. After sequencing genomes from skeletons at the lake, scientists revealed surprising ancestral results of the remains, linking 23 skeletons to South Asia, 14 to the eastern Mediterranean and one to Southeast Asia.

In 1942, hundreds of human skeletal remains were discovered at a lake deep in the Himalayas, baffling experts. Dubbed "Skeleton Lake," the site has been shrouded in mystery for decades, sparking new DNA analysis of the bones. The research, however, has yielded surprising results.

Roopkund Lake is 16,499 feet above sea level in the Indian Himalayas and the skeletons found there were long thought to have been victims of an ancient catastrophic event, say scientists.

The research findings are published in the journal Nature Communications.

“Little is known about the origin of these skeletons, as they have never been subjected to systematic anthropological or archaeological scrutiny, in part due to the disturbed nature of the site, which is frequently affected by rockslides, and which is often visited by local pilgrims and hikers who have manipulated the skeletons and removed many of the artifacts,” the international team of researchers explain in their study.

The grisly site has also become part of local legend. “Local folklore describes a pilgrimage to the nearby shrine of the mountain goddess, Nanda Devi, undertaken by a king and queen and their many attendants, who—due to their inappropriate, celebratory behavior—were struck down by the wrath of [nearby mountain] Nanda Devi,” the scientists explain. “It has also been suggested that these are the remains of an army or group of merchants who were caught in a storm. Finally, it has been suggested that they were the victims of an epidemic.”

Scientists sequenced genomes from 38 skeletons at Roopkund Lake, revealing surprising results. While 23 had ancestry typical of South Asia, 14 were from the eastern Mediterranean. One individual was found to have Southeast Asian ancestry.

"We were extremely surprised by the genetics of the Roopkund skeletons," said lead author Éadaoin Harney of Harvard University, in a statement released by Germany's Max Planck Institute, which was also involved in the research. "The presence of individuals with ancestries typically associated with the eastern Mediterranean suggests that Roopkund Lake was not just a site of local interest, but instead drew visitors from across the globe."

Additionally, radiocarbon dating found that the remains are from very different eras. All of the remains with South Asian ancestry were dated to around 800 B.C., while the other skeletal remains analyzed were dated to around 1800 B.C. “These findings refute previous suggestions that the skeletons of Roopkund Lake were deposited in a single catastrophic event,” the scientists explain, in Nature Communications.

"It is still not clear what brought these individuals to Roopkund Lake or how they died," said Niraj Rai of the Birbal Sahni Institute of Palaeosciences in Lucknow, India, in the Max Planck Institute's statement. “We hope that this study represents the first of many analyses of this mysterious site."

Grisly sites in other parts of the world are also revealing their secrets. A medieval burial pit in Lebanon, for example, is shedding new light on the Crusader era in the Middle East.

Workers preparing to lay new water pipes recently discovered a gruesome ancient burial site in the U.K. Some 26 human skeletons from the Iron Age and Roman periods were found at the site in Childrey Warren, Oxfordshire, some of which are believed to be ritual burials.

Experts in Peru recently revealed the gruesome details of a 15th-century ritual sacrifice site that contained the remains of more than 140 children.

Roopkund Lake is 16,499 feet above sea level in the Indian Himalayas. (Pramod Joglekar)