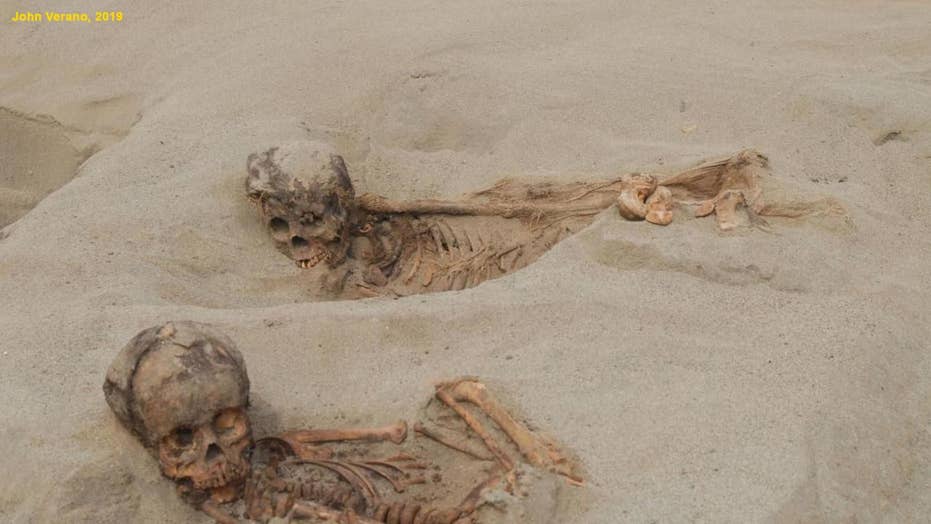 Scientists discovered the mummified remains of 140 children at Huanchaquito-Las Llamas in Peru, an archaeological site believed to be where ritual sacrifices took place in the 15th-century.

Experts have revealed the gruesome details of a 15th-century ritual sacrifice site in Peru that contains the remains of more than 140 children.

In a new study on the archaeological site at Huanchaquito-Las Llamas, archaeologists explain that the children’s hearts were apparently ripped from their bodies. The grisly location, which is near the UNESCO world heritage site of Chan Chan, is the largest known mass sacrifice site of children in the Americas, they say.

The remains of over 200 llamas, or possibly alpacas, were also discovered across an area spanning more than 7,000 square feet. “Cut marks transecting the sternums and displaced ribs suggest both the children and llamas may have had their chests cut open, possibly during ritual removal of the heart,” scientists explain, in a statement. Analysis of the human remains reveals that they were boys and girls aged between 5 and 14.

An international team of researchers led by Gabriel Prieto of the National University of Trujillo compiled details of excavations conducted between 2011 and 2016. Their findings are published in the journal PLOS ONE.

Archaeologists were stunned by the scale of the ritual sacrifice site. (John Verano, 2019)

Radiocarbon dating indicates that the remains are from around 1450 A.D., a time when Huanchaquito-Las Llamas was part of the Chimu culture. “A thick layer of mud overlaying the burial sediments indicates that this mass killing was preceded, and perhaps inspired, by a major rainstorm or flood,” they explain in the statement.

Experts were stunned to find such a huge mass sacrifice site in northern coastal Peru, some 350 miles north of Lima.

"This archaeological discovery was a surprise to all of us — we had not seen anything like this before …” said Tulane University Anthropology Professor John Verano, who is one of the study’s authors, in a statement. “This site opens a new chapter on the practice of child sacrifice in the ancient world."

The researchers note that the ritual sacrifice was “a large investment of resources for the Chimu culture” and hope to reveal more details about the sacrificed children.

Other grisly sacrificial sites have been revealing their secrets. A vast array of skulls buried beneath the streets of modern Mexico City, for example, have offered a chilling glimpse into Aztec human sacrifice.

LiveScience reports that hundreds of Mayan artifacts that may have been used in ritual animal sacrifices have been discovered at the bottom of a Guatemalan lake.