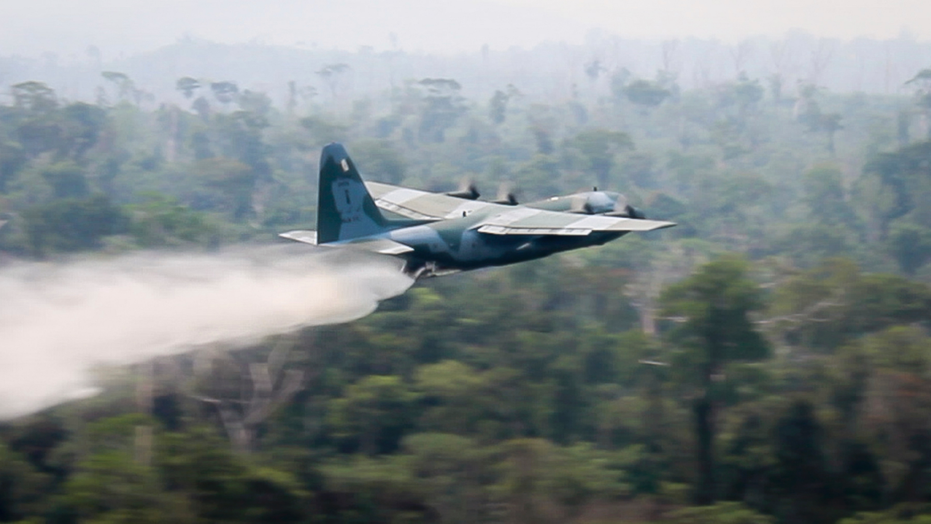 As the Amazon rainforest burns at an unprecedented pace, new satellite imagery from NASA shows an enormous cloud of poisonous carbon monoxide rising from the devastation.

Taken from NASA's Atmospheric Infrared Sounder (AIRS) instrument, aboard the Aqua satellite, the images show the cloud evolving between Aug. 8 and Aug. 22. It starts first over Brazil, where the majority of the rainforest is located, and ultimately spreads to most of the northern part of South America.

"A pollutant that can travel large distances, carbon monoxide can persist in the atmosphere for about a month," NASA wrote on its website. "At the high altitude mapped in these images, the gas has little effect on the air we breathe; however, strong winds can carry it downward to where it can significantly impact air quality. Carbon monoxide plays a role in both air pollution and climate change."

This time series shows carbon monoxide associated with fires from the Amazon region in Brazil from Aug. 8-22, 2019. Made with data collected from the Atmospheric Infrared Sounder (AIRS) on NASA's Aqua satellite, the images map carbon monoxide at approximately 18,000 feet (5,500 meters) altitude. Each "day" in the series is made by averaging three day's-worth of measurements. (Credit: NASA/JPL-Caltech)

The vast specter changes colors, going from green to yellow to red, which represents a rather large increase in carbon monoxide in the atmosphere. NASA said that green indicates concentrations of approximately 100 parts per billion by volume (ppbv), while yellow is indicative of 120 ppbv.

Dark red is representative of 160 ppbv, but "[]local values can be significantly higher," NASA added.

100 ppbv is considered normal for the atmosphere according to the University Corporation for Atmospheric Research.

Carbon monoxide is an odorless, colorless gas that is extremely harmful to humans and can often result in death. According to the Center for Disease Control, the most common symptoms of carbon monoxide poisoning are "headache, dizziness, weakness, upset stomach, vomiting, chest pain, and confusion."

A tree stump glows with fire amid smoke along the road to Jacunda National Forest, near the city of Porto Velho in the Vila Nova Samuel region which is part of Brazil's Amazon, Monday, Aug. 26, 2019. The Group of Seven nations on Monday pledged tens of millions of dollars to help Amazon countries fight raging wildfires, even as Brazilian President Jair Bolsonaro accused rich countries of treating the region like a "colony." (AP Photo/Eraldo Peres)

The CDC adds that these symptoms "are often described as 'flu-like' and if a person breathes a lot of the poisonous gas, it can cause them to pass out or even die.

Last week, NASA satellites were able to capture the smoke from the rampant wildfires in space. Amazonas, the largest state in Brazil, recently declared a state of emergency over the forest fires, according to Euro News.

The country's National Space Research Institute, which monitors deforestation, has recorded that the number of fires has risen by 85 percent to more than 77,000 in the last year, a record since the institute began keeping track in 2013. About half of the fires have been in the Amazon region, with many in just the past month.

At a summit in France, the Group of Seven nations pledged $20 million on Monday to help fight the flames in the Amazon and protect the rainforest, in addition to a separate $12 million from Britain and $11 million from Canada.

The international pledges came despite tensions between European countries and Brazilian President Jair Bolsonaro, who has accused rich countries of treating the region like a "colony" and suggested the West is angling to exploit Brazil's natural resources.

But the funds, which are widely seen as critical support, are still a relatively meager amount for dealing with an environmental crisis that threatens what French President Emmanuel Macron has called "the lungs of the planet."