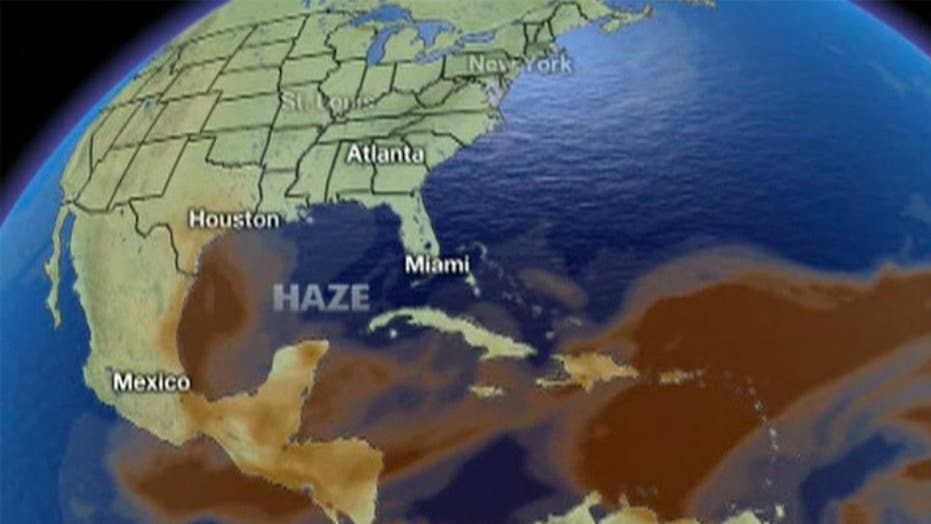 HOUSTON – Hurricane season kicked off on June 1st, but so far there have no major calls for alarm in the Atlantic.

Those living in Texas, Oklahoma, and even New Mexico may have noticed hazy skies a couple of times this summer. It’s a large amount of dust, blown from the Sahara desert. The dust particles traversed thousands of miles across the Atlantic, and meteorologists say they may have temporarily stopped hurricanes from forming.

“The dust tends to correspond with those stronger winds aloft,” said Reilly.

According to the National Oceanic and Atmospheric Administration, “the dust sits in a hot and dry layer of the atmosphere that is directly above cooler and more humid air above the Atlantic Ocean…The hot, dusty air puts a stop to any thunderstorms that may develop in the moist layer beneath it.”

“You can see it a lot better with our new satellites … you can actually see the dust as it moves throughout the Atlantic, so I think that’s why we’re aware of it now,” he said.

Other factors are contributing to a slower-than-normal season.

“We have cooler-than-average sea surface temperatures out in the Atlantic, where the storms form. We also have stronger winds aloft that tend to rip apart storms before they can get going,” said Reilly.

So far, the season has seen five named storms, including two hurricanes. NOAA states, “an average six-month hurricane season produces 12 named storms.” Earlier this month, seasonal forecasters with NOAA increased the chances of a below-normal Atlantic hurricane season to 60 percent. That’s up 25 percent since May.

Still, Reilly warned people not to let their guard down, reminding them that it only takes one bad storm to cause severe damage—a warning not taken lightly on the one-year-anniversary of Hurricane Harvey.

“We provided about $13.8 billion to survivors for Hurricane Harvey. About $1.6 billion of that is for individuals that suffered damage,” said FEMA Regional Administrator Tony Robinson.

Experts warn people to be cautious despite lack of storms, warning that it only takes one bad storm to cause severe damage. Communities like Rockport are still rebuilding after Hurricane Harvey. (Fox News)

Robinson joined Vice President Mike Pence at First Baptist Church in Rockport on Wednesday. It marked a return for the vice president, who stopped at the church a year ago after Harvey damaged it.

“I want to encourage you to continue on and know that we’ll continue to partner with you every single step of the way,” he added.

Gulf Coast communities like Rockport face higher risks than those by the Atlantic coast. Conditions leading to a slower-than-normal season in the Atlantic aren’t always shared in the Gulf.

“They’re not nearly as prevalent in the Gulf so we’re always vulnerable to a Gulf developing storm. The other thing is you don’t have a lot of time to prepare if it forms right in the Gulf. Harvey was a good example,” said Reilly.

With the peak of hurricane season approaching mid-September, he cautioned, no one’s in the clear just yet.