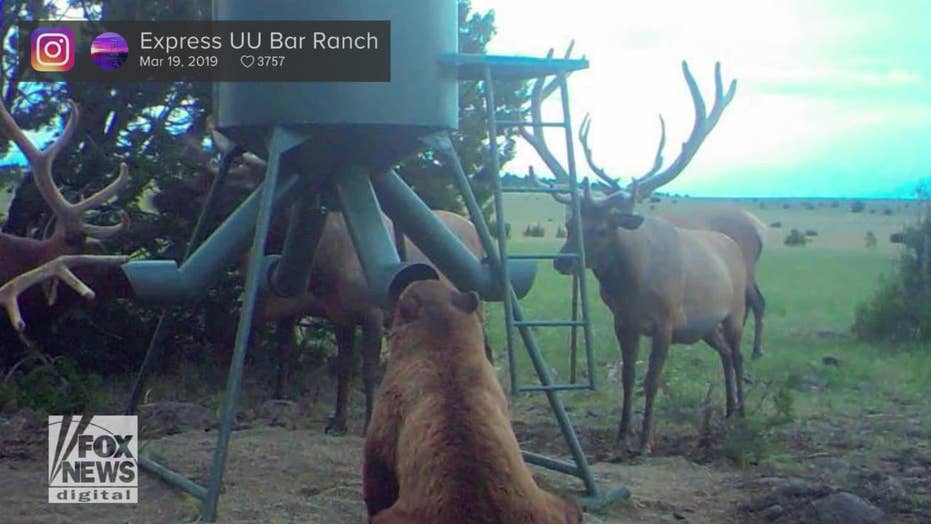 Bizarre photo of a bear surrounded by elk goes viral

A bizarre photo of a bear surrounded by elk has gone viral after it was posted to social media by the Express UU Bar Ranch in Cimarron, northern New Mexico.

A bizarre photo of a bear surrounded by elk has gone viral after it was posted to Facebook by a ranch in Cimarron, northern New Mexico.

The incredible image of the bear and a number of elk at a feeder has racked up 2,500 shares and over 200 comments since it was posted to the social network by the Express UU Bar Ranch on March. 19. “Now here’s something you don’t see everyday!,” the ranch said in its post.

“Bullish and bearish at the same time. Neat,” quipped one commenter. “Bear buffet!!!!” wrote another.

Express UU Bar Ranch, which describes itself as one of the largest private ranches, covers around 180,000 acres.

KRQE reported that the image was captured in July 2016 but was only posted to Facebook earlier this month.

The Express UU Bar Ranch lies along the Santa Fe trail and is home to a wide array of animals, including mountain lions and antelopes and mule deer, according to its website.

There are 22 cameras dotted across the ranch’s land, according to KQRE. A bear climbing a ladder to the feeder and six bears sitting around the feeding station have also been caught on camera, KQRE added.