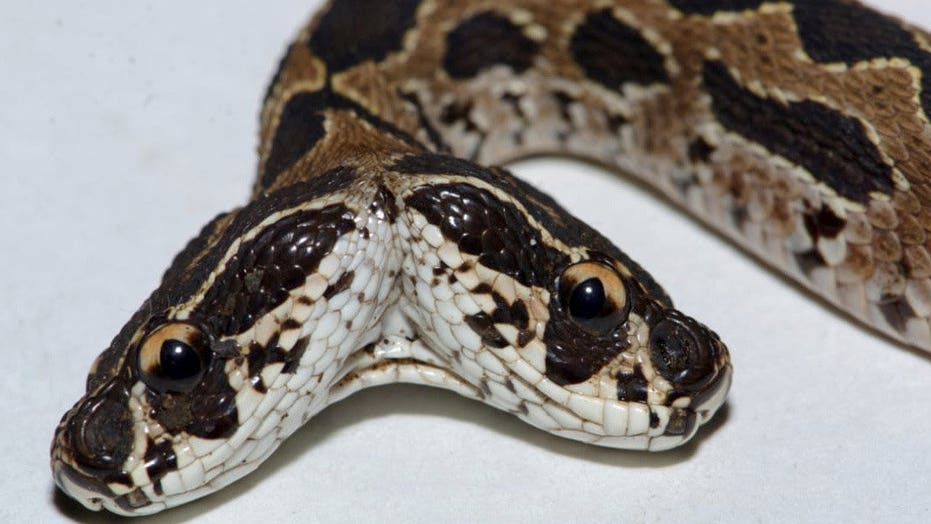 The snake was spotted outside a residence in Maharashtra, in western India. After the deadly snake was located, it was taken to a facility that handles such creatures.

Despite being one of the deadliest snakes in the world, the two-headed Russell's viper could be vulnerable in the wild, given the genetic abnormality. Each head, which is approximately 0.8 inches in length, has its own ideas about how to catch and eat prey.

This rare two-headed Russell's viper was rescued by a team of rescuers in the western Indian state of Maharashtra. (Credit: SWNS)

MYSTERY OF HOW FLYING SNAKES MOVE IS SOLVED BY SCIENTISTS

According to the University of Michigan, Russell's viper is "one of the most dangerous snakes" in Asia and accounts for "thousands of deaths each year." After a person is bitten, they experience a wide swath of symptoms, ranging from pain to vomiting to dizziness to kidney failure.

The University of California, San Diego has detailed steps for immediate first aid if someone is bitten by Russell's viper which can be found here.

Two-headed snakes are rare and typically do not survive for long in the wild, according to National Geographic. The rare genetic abnormality can hinder the snake’s ability to catch prey.

“Snakes operate a good deal by smell, and if one head catches the scent of prey on the other's head, it will attack and try to swallow the second head,” National Geographic explained, adding two-head snakes develop similarly to Siamese twins, when an embryo does not properly split into two.

A two-headed timber rattlesnake was found in a New Jersey forest in August 2019, Fox News previously reported, and a two-headed western rat snake was discovered by a New Orleans family in their backyard in June 2018.