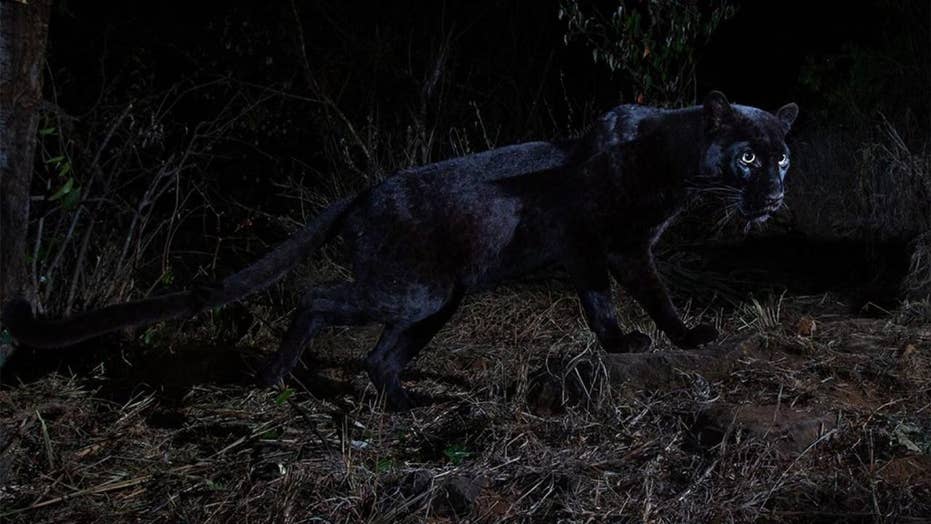 A rare black leopard was spotted in Africa for the first time in a century.

An ultra-rare black leopard — with a silky-looking, shiny coat — was spotted in Africa for the first time in more than 100 years, and the wildlife photographer who captured the elusive big cat credits the sighting simply to dumb luck.

Photographer Will Burrard-Lucas had heard murmurs about the potential presence of a black leopard roaming the area when he set up camp in Kenya. With help from a local tour guide and other leopard researchers in Laikipia County, who followed tracks believed to belong to the leopard, Burrard-Lucas eventually settled on what he considered the perfect spot to set up Camtraptions Camera Traps.

"I never get my hopes up, and after the first couple of nights I hadn't got this leopard and I was beginning to think I'd be lucky if I get a photo of a spotty leopard, let alone this black one," Burrard-Lucas told BBC News, noting it wasn't until four days later that he struck gold — or better yet: black.

Burrard-Lucas told the news organization the black leopard could easily go undetected, as it blended into the darkness. But its glowing eyes lit up on film.

"Usually on these camera trap photos with the flash you see the animal very clearly. But as it blended in with the black night so well all I could see was these eyes staring out of the picture," he described to the BBC.

After sharing photographic evidence of his impressive discovery, Burrard-Lucas was confirmed to be the first person to capture an African black leopard on camera in about a century. A group of researchers in Laikipia County are credited with helping Burrard-Lucas accomplish this incredible feat.

"Almost everyone has a story about seeing one, it's such a mythical thing."

The images now accompany a paper detailing the confirmed black leopard recently published in the African Journal of Ecology.

The previously confirmed sighting — which was also caught on film — of a black leopard in Africa was back in 1909 in Addis Ababa, Ethiopia, according to the paper. A photograph of that big black cat is stored at the National Museum of Natural History in Washington, D.C.

"Almost everyone has a story about seeing one, it's such a mythical thing," Nick Pilfold, who was lead researcher for a leopard conservation program in Kenya, told National Geographic.

In the paper, Pilfold and his team explained how they set up eight cameras around the Loisaba Conservancy after staff members were alerted about possible sightings of a black leopard. In early 2018, they were able to spot the mysterious black leopard, estimated to be a 2-year-old female, at least five times — Feb. 16, Feb. 28, March 11, March 15 and April 14 — five different locations.

"Even when you talk to the older guys that were guides in Kenya many years ago, back when hunting was legal [in the 1950s and ‘60s], there was a known thing that you didn't hunt black leopards. If you saw them, you didn't take it," Pilford told the magazine.

There are nine leopard subspecies that are native to more than 25 African countries, according to the African Wildlife Federation (AFW). The black cats have been listed as "vulnerable" since 1986, the AFW says.