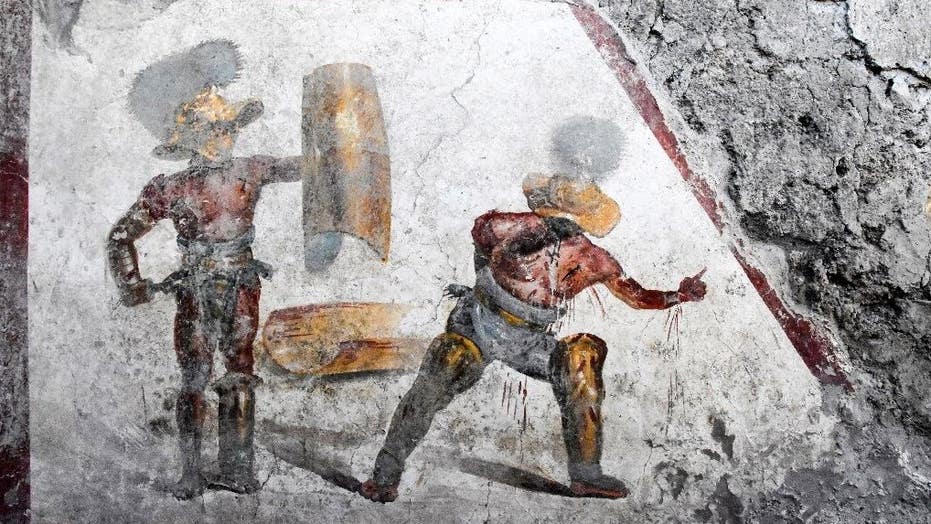 Archaeologists have unearthed a stunningly realistic fresco of gladiators in action amid ongoing excavation work in the ruins of Pompeii.

The vibrant blue, red and gold fresco, which measures three feet by 4.5 feet, is in an area that's not currently accessbile to visitors.

“Of particular interest in this fresco is the extremely realistic representation of the wounds,” said Osanna, adding that the outcome of the fight is unknown. The losing gladiator is holding up his finger to “implore for mercy,” he added.

The fresco was found in what scientists believe was a tavern frequented by gladiators. (AP)

According to Phys.org, a "Murmillo" fighter wearing a plumed, wide-brimmed helmet with a visor is seen holding a large shield and a sword. Nearby lies the shield of a defeated "Thraex," who has suffered a deep wound.

As part of a multimillion-dollar project funded by the European Union, Pompeii is undergoing an extensive excavation, with archaeologists removing tons of debris from long-buried parts of the city.

Italy’s culture minister, Dario Franceschini, hailed the discovery on Friday, noting that “a few years ago Pompeii was known around the world for its negative image. ... Today’s story is one of redemption.”

The ancient Roman city, near Naples, was buried by volcanic ash and pumice with the fierce eruption of Mount Vesuvius in A.D. 79.