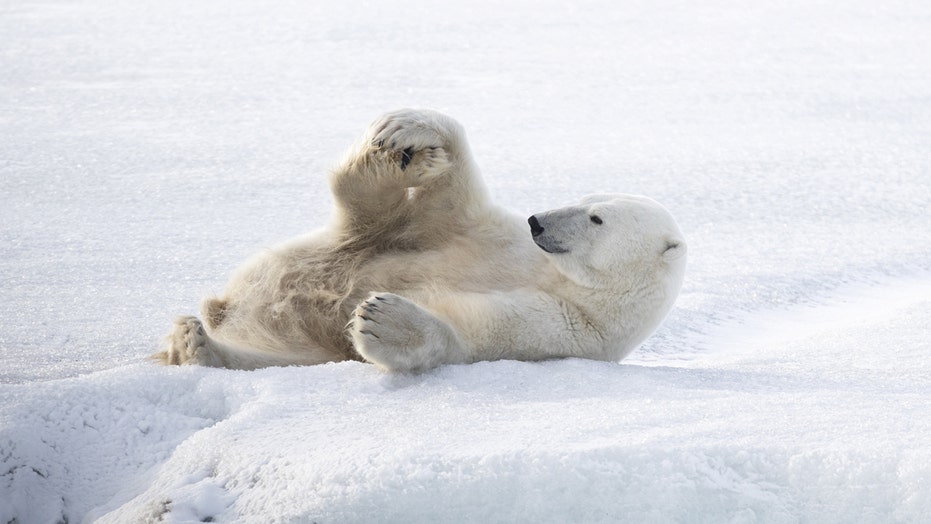 A photographer has captured remarkable pictures of a polar bear appearing to do a number of yoga poses in the Arctic.

Wildlife photographer Paul Williams, who took the rather amusing photos, said that he was on an expedition to the Arctic circle on a boat when he spotted the pliable polar.

This chilled-out polar bear appears to adopt a series of yoga poses as he frolics on a frozen lake. (Credit: SWNS)

After realizing he would not get any food, the bodacious bear started to do a series of stretches, to Williams' amazement.

"He looked so frustrated, like he had done all that work for absolutely nothing and that's when he started doing the poses," the photographer said.

The giant carnivore even performs a "down dog" pose with his fur-covered bottom sticking into the air. (Credit: SWNS)

"It really does look like a session of yoga," Williams continued, adding, "It was one of those times when you put down the camera quite a bit just to experience what was going on, because it was so magical."

Williams added that the bear is in very good condition but their habitat may soon not be, citing the effects of climate change on the area.

A series of amusing photos of the relaxed bear were captured by photographer Paul Williams on a lake south of the Arctic circle. (Credit: SWNS)

"Whoever says climate change isn't real is really deluded," he said. "On part of the trip I did a polar plunge where you actually go into the water, but the water was only a few degrees below zero, which is not normal."