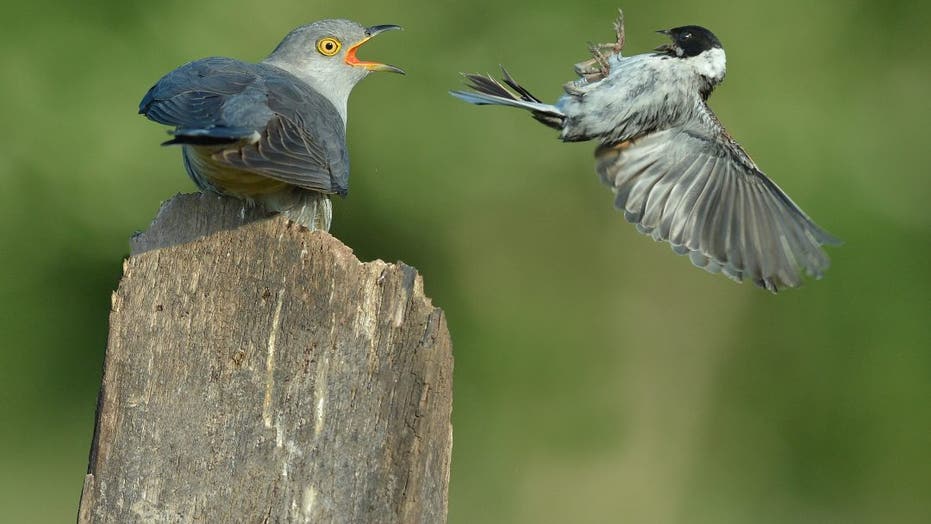 An amateur photographer has managed to capture amusing photos of two cuckoos fighting off smaller birds over a spot to relax.

The cuckoos, which live on every continent except Antarctica, were spotted in rural North Yorkshire around 6 a.m. by Keith Bannister, British news agency SWNS reports. Bannister, a retired warehouse worker, was keen to get images of the birds because of how animated they become.

"You can see how angry they were at these little birds," Bannister, 69, said. "The bunting and the warbler were really harassing them, they were going right at the cuckoos."

These hilarious photos show a cuckoo seeing off a series of smaller birds in a string of furious face-offs. (Credit: SWNS)

In one image, the cuckoos can be seen with its jaws wide open coming closer to the small birds, a bunting and a warbler.

The larger birds can be seen with their jaws agape as they bear down over the smaller creatures, which are a bunting and a warbler. (Credit: SWNS)

In another photo, the bunting is retreating in terror, as the cuckoo squawks directly in its face.

"It's always great when you have a look at the photographs and see how well they have come out," Bannister added. "I'm really pleased with these ones."