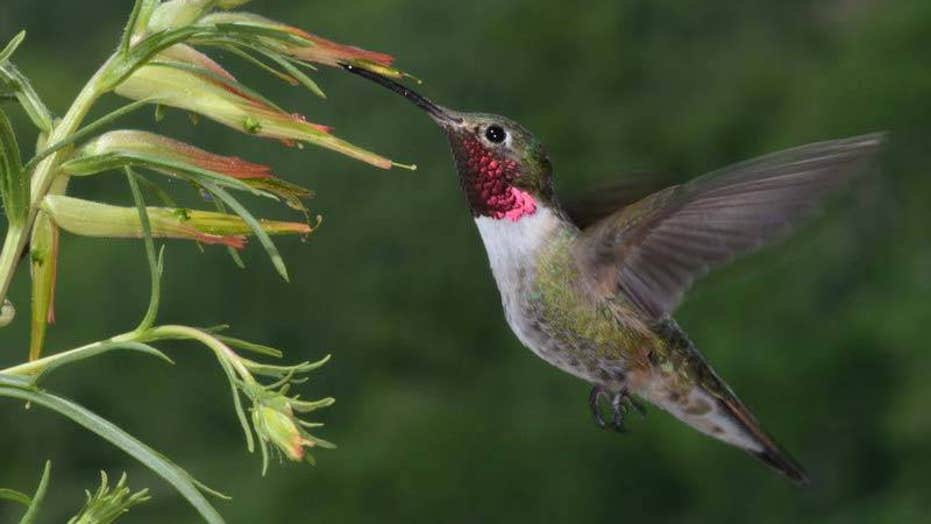 The research notes that hummingbirds have a fourth retinal cone capable of detecting ultraviolet light, something humans are not able to do. This allows them to see four dimensions of color, compared to three for humans.

“Humans are color-blind compared to birds and many other animals,” said the study's lead author and Princeton University assistant professor Mary Caswell Stoddard in a statement. “Not only does having a fourth color cone type extend the range of bird-visible colors into the UV, but it also potentially allows birds to perceive combination colors like ultraviolet plus green and ultraviolet plus red — but this has been hard to test.”

NASTY IN PINK: FLAMINGOS WITH BRIGHTER FEATHERS ARE MORE AGGRESSIVE THAN OTHERS, STUDY SAYS

The study has been published in Proceedings of the National Academy of Sciences.

Humans are able to see a small portion of the visible light spectrum and some other colors that are not part of the spectrum, such as purple –­ which is made up of red and yellow –­ or green, which is comprised of blue and yellow. The hummingbirds, however, use their fourth cone to see ultraviolet and red completely separately.

“Most detailed perceptual experiments on birds are performed in the lab, but we risk missing the bigger picture of how birds really use color vision in their daily lives,” Stoddard added. “Hummingbirds are perfect for studying color vision in the wild. These sugar fiends have evolved to respond to flower colors that advertise a nectar reward, so they can learn color associations rapidly and with little training.”

To come up with their findings, the scientists from Princeton, the University of British Columbia, Harvard, the University of Maryland and the Rocky Mountain Biological Laboratory created bird feeders that had tubes on them that had a wide swath of colors.

With the hummingbirds and their love of sugar, the researchers were able to see the hummingbirds "correctly choosing the ultraviolet plus green light associated with sugar water," study co-author Harold Eyster said.

“It was amazing to watch,” Eyster added. "Our experiments enabled us to get a sneak peek into what the world looks like to a hummingbird.”