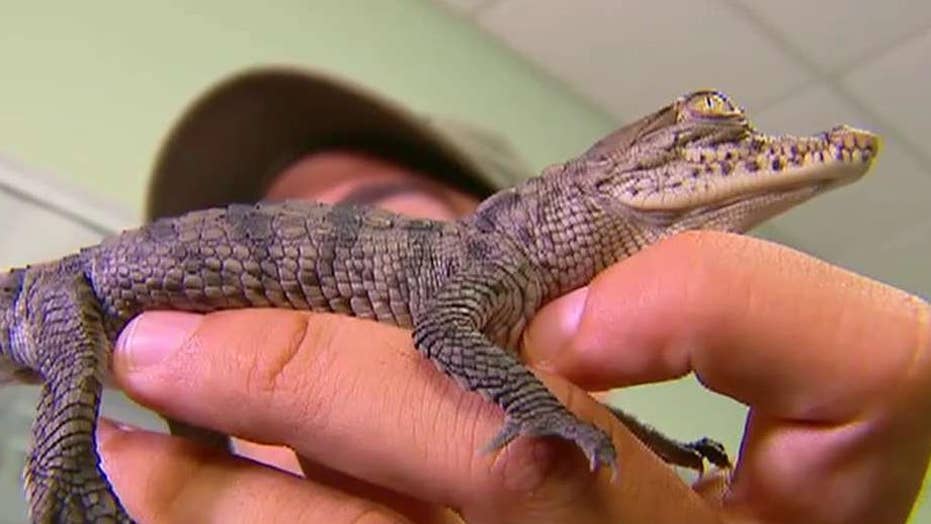 American crocodiles were once on the brink of extinction, but today they number about 2,000 of them and one out of four calls the 170 miles of nuclear cooling canals home; Phil Keating reports.

Yet it’s the plant’s other customers that are getting special attention right now – they are just hatching out of their shells.

Baby American crocodiles, once on the brink of extinction, are crawling back and thriving at, of all places, the nuclear power plant operated by Florida Power & Light.

“They’re NOT radioactive,” he added, which is a question he gets asked all the time.

FORMER MARINE FROM FLORIDA WORKS WITH ALLIGATORS AND CROCODILES, SAYS THEY'RE HER ‘BEST FRIENDS’

During the hatching season, which happens in July and August, the team hops on airboats, cruising up and down Turkey Point’s 168 miles of cooling canals, looking for crocodile nests. This month, they found 27 nests and rescued 300 little crocodiles, which are awfully cute – at least for the moment.

In the lab, they’re measured and weighed and receive a microchip inserted in their tails. They will be tracked for their entire lives.

American crocodiles only live in South Florida. Back in the 1970s, there were only about 500, and the species was listed as “endangered.” Since then, they’ve rebounded, crawling up to the better listing of “threatened,” with an estimated 2,000 roaming Turkey Point, Crocodile Lake and Everglades National Park.

About 25 percent of the crocs call the nuclear power plant, which is also a crocodile sanctuary, home.

"It’s basically just seeing the fruits of your labor, you know,” he said. “You go throughout the whole year waiting for this moment, waiting for those babies to hatch, collecting those babies and then releasing them back, which is just the ultimate satisfaction.”

The crocodiles thrive at this unlikely nuclear location because of the canals, the berms between them and the very minimal human encounters, since it is a high-security facility.

Once the hatchlings emerge into the world, the croc team then rescues them, takes them back to the lab and then returns them to the wild.

“As soon as they hit the water, they know exactly what to do,” said Lloret.  From there, the little crocs are ready for the world.

Each of the nests contain 30 to 50 eggs but most of the hatchlings won’t survive, due to predation by birds, fish and even other crocodiles.