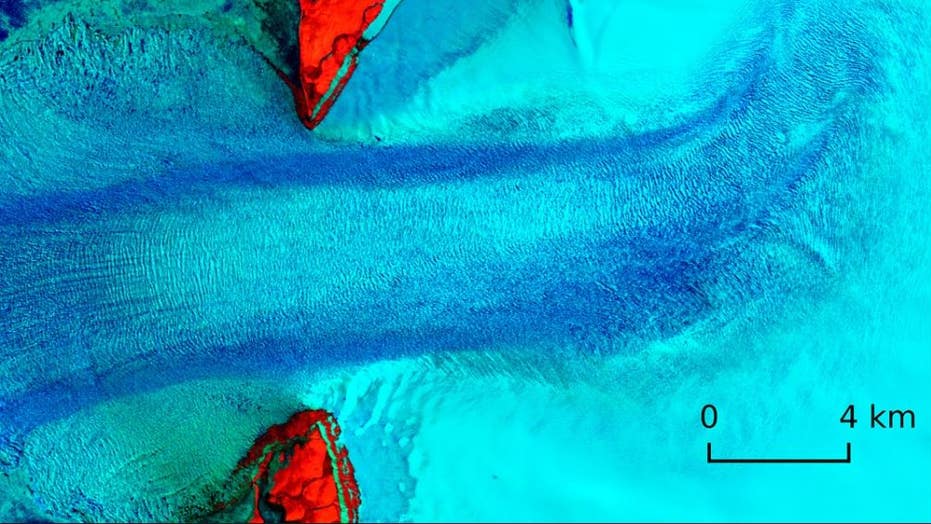 Geologists have seen for the first time rapid ice loss at the Vavilov ice cap in the Arctic Circle.

According to work recently published in the journal Geophysical Research Letters, the Cornell University scientists observed a glacial surge that grew wider and fanned out -- shedding almost 11 percent of its mass, or 9.5 billion tons of ice -- since 2013.

“This is the first documented case of an ice stream being formed. We really didn’t expect to see this,” said lead author Whyjay Zheng, a Cornell doctoral student, in a statement.

The ice stream now resembles a triangular-shaped fan, with darker crevasses bordering it.

“In the satellite images, it seems like the entire west wing of the ice cap is just dumping into the sea,” Zheng said. “No one has ever seen this before.”

The Vavilov ice cap in the Arctic Circle is now experiencing rapid ice loss by way of an ice stream, shown here. It has shed 9.5 billion tons of ice since 2013. (University of Cornell) (Cornell University/Whyjay Zheng/Matthew Pritchard)

Researchers say the only other places in the world where geologists had seen ice streams were Greenland and Antarctica. The Vavilov ice cap is located on the northern edge of Siberia.

“This glacier went from doing basically nothing to doing something very unusual – evolving into an ice stream,” said Matthew Pritchard, professor of earth and atmospheric sciences and a fellow at the Cornell Atkinson Center for Sustainability, in a statement.

Although the ice stream is likely related to global warming, scientists are still trying to better understand what's taken place because warming has not previously been reported to hit the Vavilov ice cap very hard.

"Now once the ice is lost, it is lost," Zheng added. "Suddenly, we have more water in the oceans."