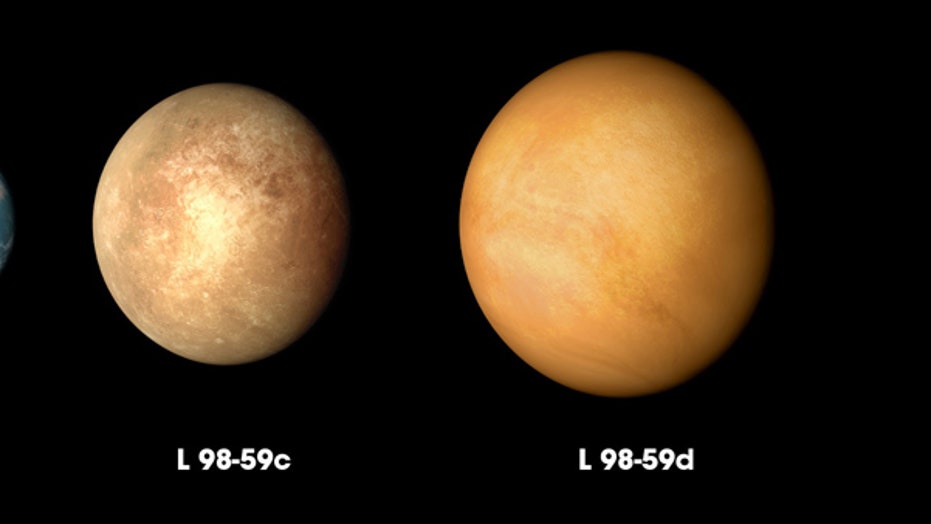 NASA said its new Transiting Exoplanet Survey Satellite space telescope has discovered its smallest exoplanet so far, an alien world that's roughly 80 percent the size of Earth and could help "unlock" secrets of how the Blue Planet became habitable.

Known as L 98-59b, the new exoplanet is in the star system L 98-59, 35 light years away from our solar system. Two other worlds were also discovered orbiting the L 98-59 star by the Transiting Exoplanet Survey Satellite, or TESS for short, nearly doubling the number of small exoplanets discovered so far.

“The discovery is a great engineering and scientific accomplishment for TESS,” said Veselin Kostov, an astrophysicist at NASA’s Goddard Space Flight Center and the study's lead author, in a statement. “For atmospheric studies of small planets, you need short orbits around bright stars, but such planets are difficult to detect. This system has the potential for fascinating future studies.”

The three planets discovered in the L98-59 system by NASA’s Transiting Exoplanet Survey Satellite (TESS) are compared to Mars and Earth in order of increasing size in this illustration. (Credit: NASA’s Goddard Space Flight Center)

NASA UNVEILS NEW MISSION TO FLY TO SATURN'S MOON, TITAN, WHICH COULD BE HOME TO ALIEN LIFE

The discovery of L 98-59b and the two other planets was published in The Astronomical Journal.

The other two exoplanets, known as L 98-59c and L 98-59d, are approximately 1.4 and 1.6 times the size of Earth, respectively. All three were discovered when TESS spotted their shadows passing by the star, which caused "periodic dips in the star’s brightness."

The smallest exoplanet ever discovered is Kepler-37b, which is approximately one-fifth the size of the Moon.

All three exoplanets occupy the so-called Venus zone, which NASA describes as a distance "where a planet with an initial Earth-like atmosphere could experience a runaway greenhouse effect that transforms it into a Venus-like atmosphere." It's possible L 98-59d could be similar to Venus, which is very rocky, or Neptune, which has a "small, rocky core cocooned beneath a deep atmosphere."

MARS MAY HAVE HOSTED LIFE EARLIER THAN EARTH DID, STUDY SAYS

Joshua Schlieder, a co-author of the study and an astrophysicist at NASA Goddard, said that not all planets that orbit stars are identical, highlighting the differences between Earth and Venus.

“We still have many questions about why Earth became habitable and Venus did not," Schlieder said. If we can find and study similar examples around other stars, like L 98-59, we can potentially unlock some of those secrets.”

TESS, which cost $200 million and was launched in April 2018 aboard a SpaceX Falcon 9 rocket, replaced the Kepler telescope, which started to malfunction towards the latter part of last year and was eventually retired in October 2018.

In total, Kepler was responsible for the discovery of more than 2,600 exoplanets, including 18 Earth-sized exoplanets.