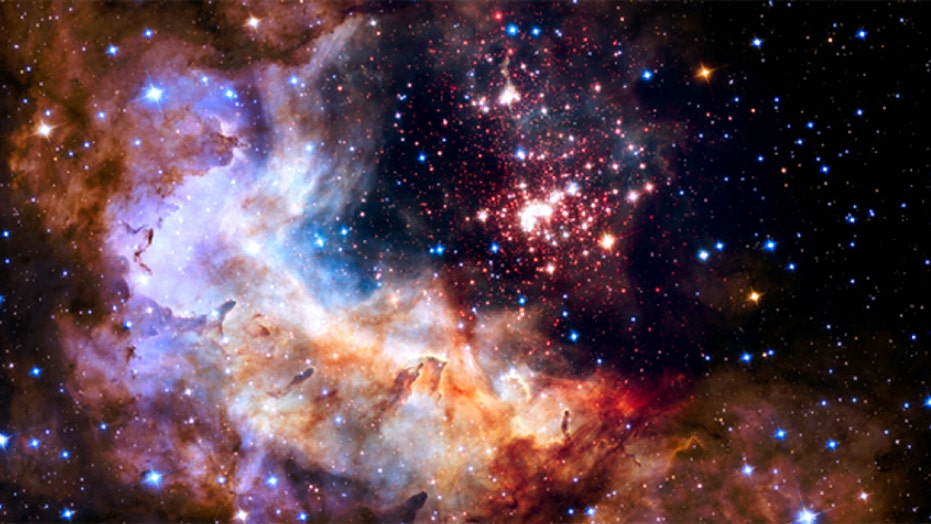 An awe-inspiring landscape of multicolored dust and jewel-like stars has been unveiled as the official image of the 25th anniversary of the Hubble Space Telescope.

More than 3,000 stars, radiating like cosmic fireworks, lie near the center of the epic new image. The stellar cluster is known as Westerlund 2. The colorful gas cloud to the left of the star cluster is a hotbed of stellar birth known as Gum 29, located 20,000 light-years away from Earth in the constellation Carina. You can take a video tour of the new Hubble image, courtesy of the Space Telescope Science Institute, NASA and the European Space Agency.

"Hubble has completely transformed our view of the universe, revealing the true beauty and richness of the cosmos," said John Grunsfeld, astronaut and associate administrator of NASA's Science Mission Directorate, in a statement from NASA. "This vista of starry fireworks and glowing gas is a fitting image for our celebration of 25 years of amazing Hubble science." [Hubble Telescope at 25: A Photo Celebration]

"The [Westerlund 2] cluster measures between 6 and 13 light-years across," according to the NASA statement. "The giant star cluster is about 2 million years old and contains some of our galaxy's hottest, brightest and most massive stars."

The gaseous region around the star cluster was also captured with the Advanced Camera for Surveys, and some of the colors in the image indicate the composition of the gas: shades of red represent hydrogen, and bluish-green represents areas that contain oxygen.

Nearby stars form the peculiar architecture that is seen in the gas cloud, such as the pointy pillars. The stellar winds emitted by these stars collide with the gas clouds and spark new star formation.

"The red dots scattered throughout the landscape are a rich population of newly forming stars still wrapped in their gas-and-dust cocoons," the statement said. "These tiny, faint stars are between 1 million and 2 million years old — relatively young stars — that have not yet ignited the hydrogen in their cores. The brilliant blue stars seen throughout the image are mostly foreground stars."

This region of space is of great interest to astronomers because it is a relatively young stellar incubator. Many of the young or embryonic stars seen in the image will grow into adulthood and be dispersed deep into interstellar space. But right now, this stellar nursery provides astronomers with information about how stars and star clusters form in the universe. (Hubble has helped scientists image many other star birth centers)

"The crisp and multiwavelength quality of this remarkable nebula underscores how far we've come since the launch [of Hubble] in 1990," said Flanagan at the unveiling event. "Hubble is today at the peak of its performance, with her most productive years ahead."

The Hubble Space Telescope launched into space on April 24, 1990. It continues to make observations of the cosmos, and may continue to operate into 2020 or beyond.