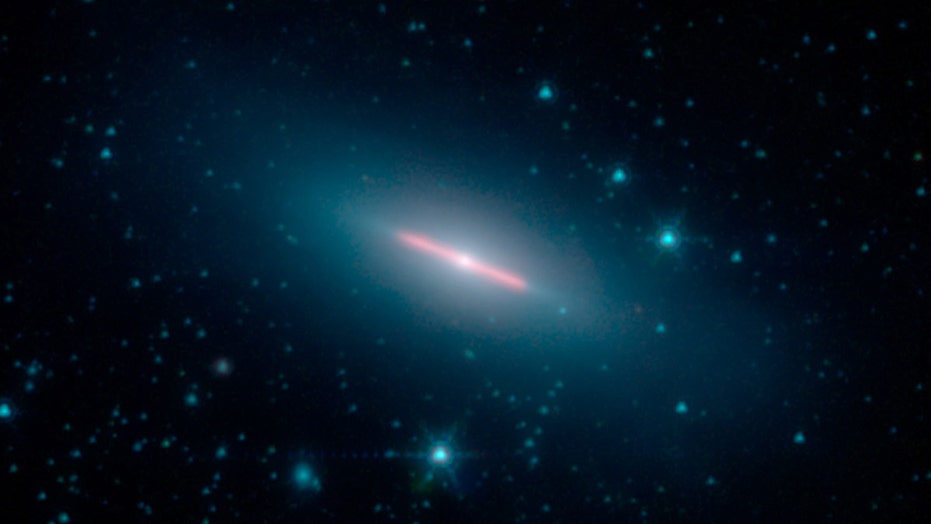 Even George Lucas would be proud of this handiwork.

According to the space agency, NGC 5866 has a "diameter of roughly 60,000 light-years" and appears differently than most galaxies (either spiral-shaped or thick disks of dust) because of our vantage point.

Galaxy NGC 5866 lies 44 million light-years from Earth and has a diameter of roughly 60,000 light-years — a little more than half the diameter of our own Milky Way galaxy. From our viewpoint, NGC 5866 is oriented almost exactly edge-on, yielding most of its structural features invisible. (Credit: NASA/JPL-Caltech)

"Spitzer detects infrared light, and the red color here corresponds to an infrared wavelength typically emitted by dust," NASA said in a statement on its website. "With a consistency similar to soot or thick smoke, the dust absorbs light from stars, then reemits light at longer wavelengths, including in infrared."

NASA added that the dust emission from NGC 5866 indicates "that there is a very flat ring or disk of dust circling the outer region of the galaxy."

NGC 5866 may be intriguing to researchers because of the way it looks from our viewpoint, but its orientation also makes it challenging to learn more about it.

"Our view of this galaxy is somewhat like our view of the Milky Way galaxy: Because Earth lies inside the Milky Way, we can see it only edge-on rather than face-on," NASA added in the statement. "But our proximity to the rest of the Milky Way has allowed astronomers to reconstruct what our galaxy would look like viewed face-on."

The Spitzer telescope took the image during its "cold" mission, which ended in 2009.