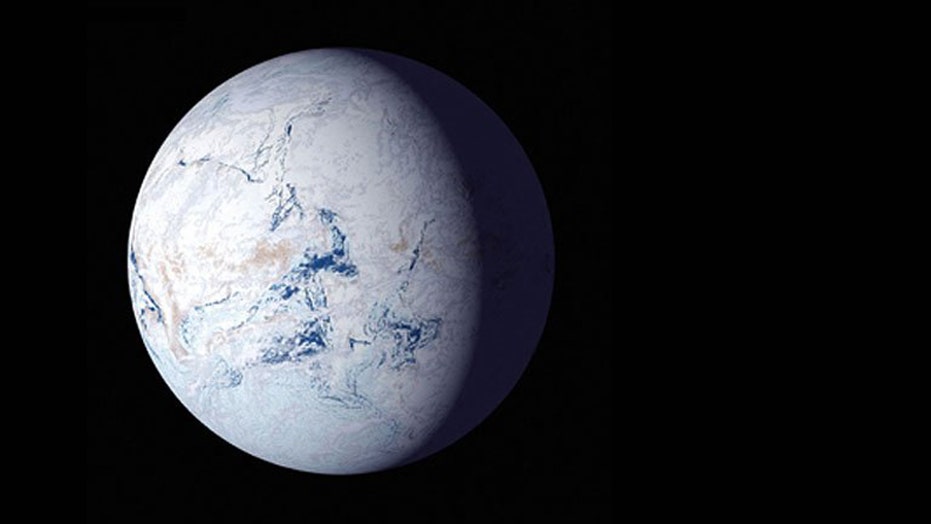 Maybe the reason we haven't found E.T. yet is he's bundled up braving some seriously cold weather.

A new study suggests that frozen alien planets may actually have a greater chance to support complex life than originally believed.

These so-called "snowball planets" – which are described as "Earthlike planets with oceans frozen to the equator" – were long thought to be hostile to life, but the new study suggests that some of these exoplanets could have areas of land that have temperatures that are considered livable.

NEARBY 'SUPER-EARTH' MAY BE HABITABLE, NASA SUGGESTS

An artist’s rendition of what a snowball planet might look like. Ice covers the oceans to the equators. (Credit: NASA)

“You have these planets that traditionally you might consider not habitable and this suggests that maybe they can be,” said the study's lead author, Adiv Paradise, in a statement.

While researchers have known that some of these "snowball" planets have sea ice near their equator, Paradise noted that "all of our life was in our oceans" during the early part of Earth, which went through its own snowball phase early on.

"There’s nothing about the land," he added.

Paradise and the other researchers performed thousands of simulations with various climates on the "snowball planets," using inputs such as energy and carbon dioxide levels. In some simulations, temperatures near the equator of these snowball planets were above 50 degrees Fahrenheit.

"Due to their lower albedo, these unfrozen regions reach summer temperatures in excess of 10 [degrees] Celsius," the study's abstract reads. "Such conditions permit [carbon dioxide] weathering, suggesting that continental weathering can provide a mechanism for trapping planets in stable snowball states. The presence of land areas with warm temperatures and liquid surface water motivates a more‐nuanced understanding of habitability during these snowball events."

It was previously thought that any carbon dioxide removal stopped once a planet entered the snowball phase, as all of the surface water would be frozen and the loss of the gas would cease. But the study found that the snowball planets can continue to lose CO2 even if they're in the frozen state, which would mean "the planets would have to have some non-frozen ground and occasional rainfall for water to continue to remove carbon dioxide from the atmosphere."

The study was published in Journal of Geophysical Research: Planets last month.