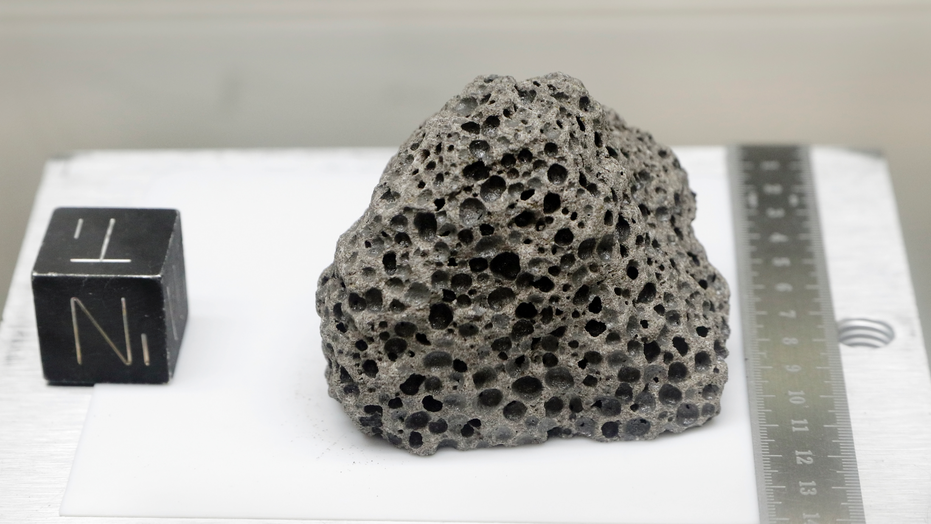 After announcing the nine teams that were granted the chance to look at the rock samples from the Moon collected nearly 50 years ago in March, NASA is finally opening up the vault.

The locked vault is located in the Johnson Space Center in Houston and the government space agency is letting the teams examine them using 21st-century technology.

"It's sort of a coincidence that we're opening them in the year of the anniversary," NASA's Apollo sample curator Ryan Zeigler told the Associated Press, while wearing a white protective suit with matching fabric boots, gloves and a hat.

The "Genesis Rock," a 4.4 billion-year-old anorthosite sample approximately 2 inches in length, brought back by Apollo 15 and used to determine the moon was formed by a giant impact, is lit inside a pressurized nitrogen-filled examination case in the lunar lab at the NASA Johnson Space Center Monday, June 17, 2019, in Houston. (AP Photo/Michael Wyke)

"But certainly the anniversary increased the awareness and the fact that we're going back to the Moon," Zeigler added.

From 1969 to 1972, 12 astronauts brought back lunar samples weighing a total of 842 pounds. Some of the rocks and soil samples were vacuum-packed on the Moon and have never been exposed to Earth's atmosphere. Some were frozen or stored in gaseous helium after Apollo 11 splashed down and have remained untouched since.

Zeigler noted that due to technological improvements over the past 50 years, the space agency was smart to wait to analyze the lunar samples.

"We can do more with a milligram than we could do with a gram back then. So it was really good planning on their part to wait," he said.

In total, there are more than 100,000 samples from the Apollo lunar inventory, including some of the original 2,200 being broken into smaller pieces for study.

Perhaps ironically, Apollo 11 yielded the fewest lunar samples, with Aldrin and Armstrong collecting just 48 samples. NASA wanted to minimize the risk Aldrin and Armstrong faced, given they were the first people to walk on the Moon. The astronauts' Extra Vehicular Activity, or the time they spent on the Moon's surface outside the Eagle lander, lasted just 2 hours, 31 minutes and 40 seconds.

Collected during Apollo 15, a 3.5 billion years old basalt rock similar to rocks formed around Hawaii, is displayed in a pressurized nitrogen-filled examination case inside the lunar lab at the NASA Johnson Space Center Monday, June 17, 2019, in Houston. For the first time in decades, NASA is about to open some of the pristine samples and let geologists take a crack at them with 21st-century technology. (AP Photo/Michael Wyke)

“By studying these precious lunar samples for the first time, a new generation of scientists will help advance our understanding of our lunar neighbor and prepare for the next era of exploration of the Moon and beyond, “ Thomas Zurbuchen, Associate Administrator for NASA’s Science Mission Directorate, said in an April statement. This exploration will bring with it new and unique samples into the best labs right here on Earth.”

In total, the teams will receive $8 million to study the lunar samples, with each team receiving varying amounts of samples. "Everything from the weight of a paperclip, down to basically so little mass you can barely measure it," Zeigler said.

Though only 15 percent of the rocks that were collected on the Moon have been studied previously, scientists have been able to learn a great deal not just about the Moon itself, but the solar system as a whole. Ziegler said scientists have determined the ages of the surfaces of Mars and Mercury, and established that Jupiter and the solar system's other big outer planets likely formed closer to the sun and later migrated outward.

"So sample return from outer space is really powerful about learning about the whole solar system," he added.

Approximately 70 percent of the haul is still in the sample vault, 15 percent is in safekeeping in White Sands, New Mexico and the rest has been given out for research or display.

Collected during Apollo 16, an anorthosite sample believed to be the oldest rock collected during the moon missions is displayed in the lunar lab at the NASA Johnson Space Center Monday, June 17, 2019, in Houston. Scientists also believe it to be from the original crust of the moon just after it cooled. (AP Photo/Michael Wyke)

Interest in the Moon has become a topic discussed at the nation's watercoolers, due to the approaching 50th anniversary of the Apollo 11 Moon landing.

Auction houses across the world are selling anything and everything Moon-related, brands, such as LEGO, are partnering with NASA on collectible items and Buzz Aldrin, Michael Collins and Neil Armstrong's song, Mark and Rick, have been in heavy demand.

Earlier this month, Fox News spoke to Armstrong's sons, who described in detail what it was like sitting at home in front of the TV, watching their father walk on the Moon, along with the rest of the world.

“We had two televisions in the house, so folks were huddled around both of them, some in the living room and some in one of the bedrooms, I think,” Mark, who was 6 at the time, said. “Friends, family, neighbors, they were all coming in and out. And, of course, we had the squawk box, as well, which I believe was set up in the bedroom at the time, so we could hear what was happening, more so than most.”

On July 20, 1969, the lunar module Eagle landed on the Sea of Tranquility and Armstrong stepped into the pages of history when he became the first man to walk on the Moon and uttered those iconic words, "That's one small step for [a] man, one giant leap for mankind."

Fox News' James Rogers and the Associated Press contributed to this report.