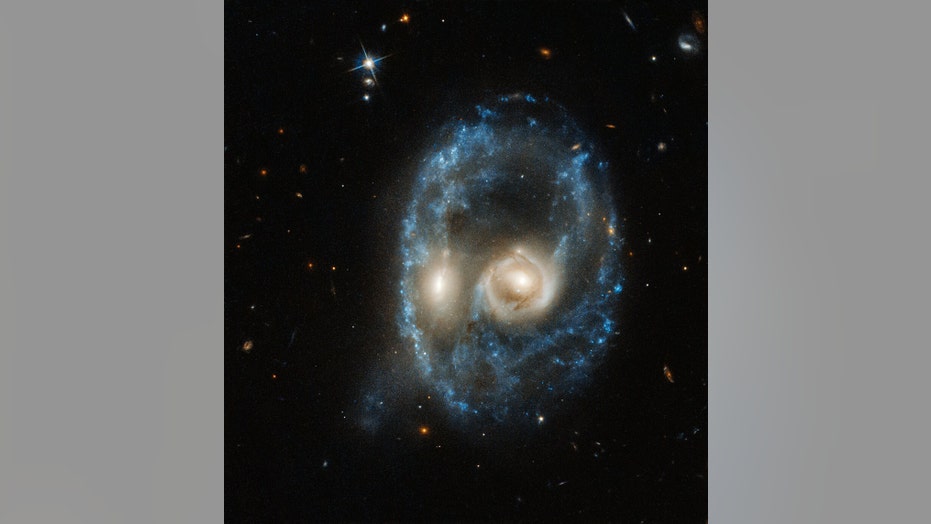 It's creepy and it's cooky. And maybe even a little mysterious and spooky.

The Hubble Telescope has spotted two galaxies colliding into one another, creating "a ghostly face" in space.

The powerful space telescope, operated by NASA, the European Space Agency and Space Telescope Science Institute, took the remarkable image of the Arp-Madore 2026-424 (AM 2026-424) system, 704 million light-years from Earth, on June 19.

This new image from the NASA/ESA Hubble Space Telescope captures two galaxies of equal size in a collision that appears to resemble a ghostly face. This observation was made on 19 June 2019 in visible light by the telescope’s Advanced Camera for Surveys. Residing 704 million light-years from Earth, this system is cataloged as Arp-Madore 2026-424 (AM 2026-424) in the Arp-Madore “Catalogue of Southern Peculiar Galaxies and Associations”.

"The crash has pulled and stretched the galaxies’ discs of gas, dust, and stars outward, forming the ring of intense star formation that shapes the “nose” and “face” features of the system," the ESA wrote in a statement on its website.

The agency continued: "Ring galaxies are rare, and only a few hundred of them reside in our larger cosmic neighborhood. The galaxies have to collide at just the right orientation so that they interact to create the ring, and before long they will have merged completely, hiding their messy past."

The ESA added that the side-by-side juxtaposition of the two central bulges of the stars is unusual. Given that they're approximately the same size, it's like that the galaxies were also the same size prior to the crash.

"This is different from the more common collisions in which small galaxies are gobbled up by their larger neighbors," the ESA said.

It's believed that the ring will last for approximately 100 million years, to be followed by the galaxies merging with one another in 1 to 2 billion years, the Daily Mail reported.