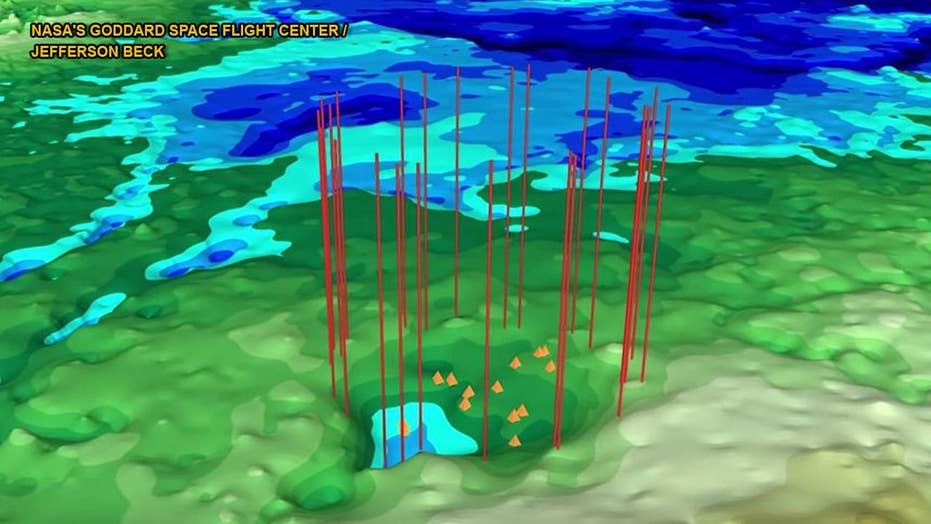 A giant crater, just over 22-miles wide, has just been discovered beneath Greenland's ice. According to NASA it may be the result of a massive meteorite crashing into the Earth. If the newly discovered crater is the result of a meteorite, it would be the 22nd-largest impact crater ever found on Earth.

NASA scientists have spotted a giant crater beneath Greenland’s ice that may be the result of a massive meteorite smashing into the Earth.

The crater, which is just over 22 miles wide, would be one of the largest meteorite impact sites on Earth if it is proved to be the result of a space rock. The crater is buried under more than a mile of ice.

In November 2018, scientists announced the discovery of a 19-mile-wide crater beneath Greenland’s Hiawatha Glacier. Experts say that the crater was formed by a meteorite that struck Earth “less than 3 million years ago” and likely “rocked the Northern Hemisphere.”

EARTH SMACKED BY AN ASTEROID 19-MILES-WIDE THOUSANDS OF YEARS AGO: 'IT ROCKED THE NORTHERN HEMISPHERE'

The crater beneath Hiawatha Glacier is the first of its type discovered beneath Earth’s ice sheets.

If the newly-discovered 22-mile-wide crater is indeed the result of a meteorite, it would be 22nd-largest impact crater found on Earth, according to NASA.

"I began asking myself ‘Is this another impact crater? Do the underlying data support that idea?’," he said, in a statement. "Helping identify one large impact crater beneath the ice was already very exciting, but now it looked like there could be two of them."

The crater is described in a study published in the journal Geophysical Research Letters.

After analyzing radar data, ice samples and erosion rates scientists say that, despite the proximity of the two craters, they do not appear to have formed at the same time. Computer models were also used to track the production of large craters on Earth, which said that craters forming close to one another, without a twin impact, are consistent with the planet’s history.

Other geographically close but unrelated craters have been found in Ukraine and Canada, according to NASA. In each pair, the ages of the craters are different.