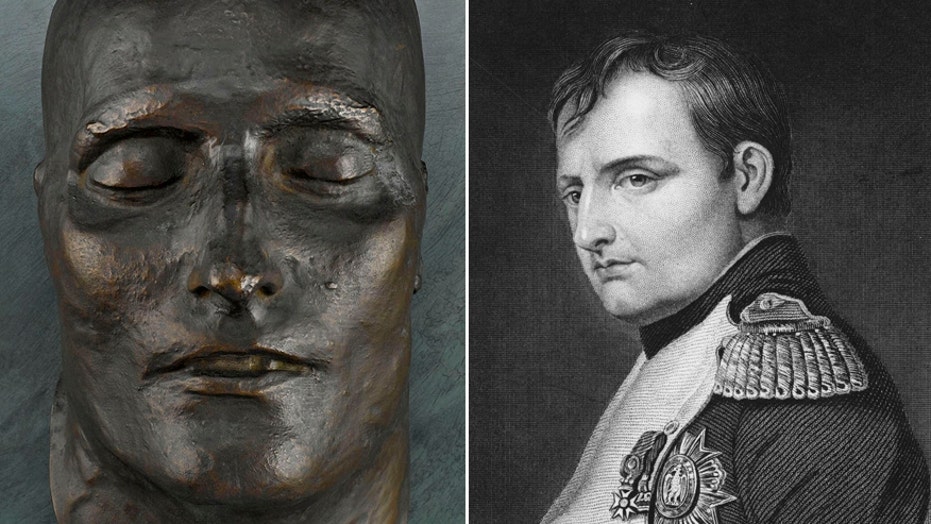 Volcanic eruption may have led to Napoleon's Waterloo defeat

According to new research, Napoleon Bonaparte's defeat at Waterloo may have been due to electrically charged volcanic ash 'short-circuited' Earth's atmosphere in 1815, causing poor weather across the globe.

A mysterious bronze death mask of French Emperor Napoleon offers a macabre glimpse into his death in exile on the remote Atlantic island of St. Helena.

The mask was cast from a mold taken shortly after Napoleon’s death, according to New Orleans gallery M.S. Rau Antiques, which is selling the unusual artifact for $34,500. Napoleon, who had been exiled to the British territory of St. Helena following his defeat in the Battle of Waterloo, died on May 5, 1821.

The story of how the cast came into being, however, has been the source of some debate.

“There remains some dispute about who took the original ‘parent cast’ of the deposed emperor, explains M.S. Rau Antiques on its website. While it was once thought that Napoleon’s personal physician, Dr. Francesco Antommarchi, took the original plaster-of-Paris cast, it is now thought that the cast was taken by British Army doctor Francis Burton on May 7, 1821.

“After setting it to dry, he reluctantly entrusted it to a Madame Bertrand, who had been a member of Napoleon’s court and shared his exile, for safekeeping until it was dry enough to pack away,” says M.S. Rau. “Unfortunately, Madame Bertrand must have had no intention of giving this precious item up, and removed all but the back third part of the mask before returning to France with her husband.”

"Madame Bertrand is believed to have given the mask to Dr. Antommarchi, who then had bronze and plaster casts made of it while he resided in France,” M.S. Rau added.

A portrait of Napoleon Bonaparte (1769 - 1821) as Emperor Napoleon 1 of France on 1 June 1815 in Paris, France. An engraving by Samuel Freeman from a painting by Paul Delaroche. (Photo by Hulton Archive/Getty Images)

The mask is inscribed “Dr. F. Antommarchi” and “Fondu Par L. Richard et Quesnel A Paris,” a reference to the Paris foundry of Louis-Marie Richard and Edouard Quesnel, where the mask was cast.

Although Napoleon was initially buried on St. Helena, his remains were returned to France in 1840 and interred at Les Invalides in Paris.

The death mask is one of a number of Napoleon death mask casts in existence. The most famous is in the Louisiana State Museum’s Cabildo in New Orleans, according to M.S. Rau Antiques.

Napoleon I (1769 - 1821) looking out to sea on the island of St Helena, where he was exiled from 1815 to his death. Original Artwork: Engraving by JE Coombe after a painting by BR Haydon. (Photo by Hulton Archive/Getty Images)

The New Orleans gallery also has the writing desk used by Napoleon on St. Helena in its collection.

One of the key figures in European history, Napoleon remains a source of fascination. Last year, an extremely rare ‘bicorne,’ or two-pointed hat, that was worn by the French leader at the Battle of Waterloo was sold at auction for $325,000.

NAPOLEON DYNAMITE: HOW AN INDONESIAN VOLCANO INFLUENCED THE BATTLE OF WATERLOO

Buttons from uniforms worn by soldiers in Napoleon’s army that invaded Russia were recently uncovered in Lithuania.

File photo - Frenchman Frank Samson takes part in the re-enactment of the battle of Ligny, as French Emperor Napoleon, during the bicentennial celebrations for the Battle of Waterloo, in Ligny, Belgium, June 14, 2015. (REUTERS/Yves Herman)

In a separate project, archaeologists recently discovered amputated limbs from the site of a field hospital used in the Battle of Waterloo.

The first complete Battle of Waterloo skeleton was identified in 2015 as a German soldier.