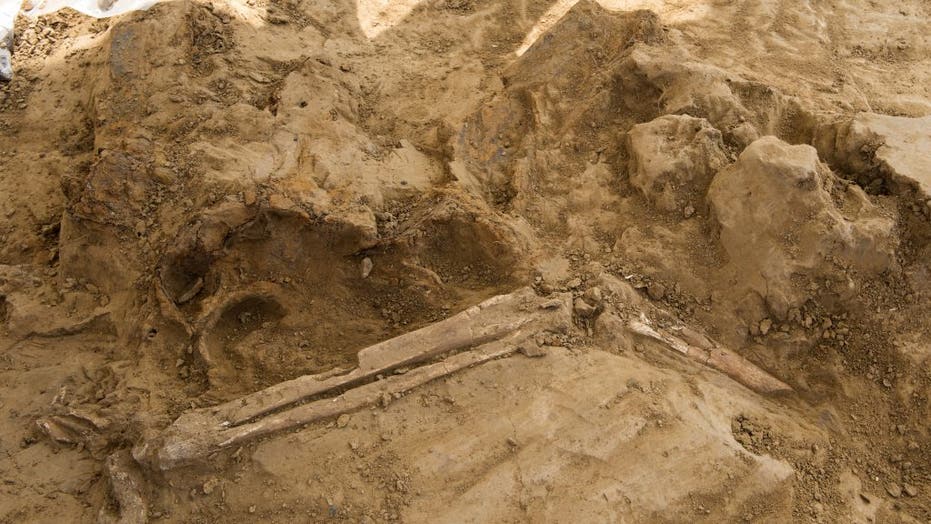 Volcanic eruption may have led to Napoleon's Waterloo defeat

According to new research, Napoleon Bonaparte's defeat at Waterloo may have been due to electrically charged volcanic ash 'short-circuited' Earth's atmosphere in 1815, causing poor weather across the globe.

Archaeologists have uncovered amputated limbs from the site of a field hospital used in the Battle of Waterloo.

Researchers were using metal detectors at the Belgian battle site when they found what may be the remains of an ammunition box. While excavating around the metal remnants, amputated human limbs were uncovered.

“In the trench with the human remains we have now got evidence of four amputations – three legs and a foot,” Mike Greenwood, a spokesman for Waterloo Uncovered, which is overseeing the excavation, told Fox News. “You can see the cut marks made by the surgeon’s saw.”

NAPOLEON DYNAMITE: HOW AN INDONESIAN VOLCANO INFLUENCED THE BATTLE OF WATERLOO

The trench where the limbs were found is about 90 feet from a farm that was used as a field hospital by British forces and their allies.

One of the human leg bones being excavated at Mont‐Saint‐Jean site. (Photo by Chris van Houts)

Napoleon’s French Army suffered a famous defeat at Waterloo on June 18, 1815. The battle was a decisive victory for forces led by the Duke of Wellington and the Prussian Field Marshal Blucher and changed the course of European history.

Part of the challenge for archaeologists working in the region is establishing that remains are from the famous 1815 battle, as opposed to more recent conflicts, such as World War I.

However, there are important clues in the trench where the amputated limbs were discovered that point to the Battle of Waterloo. “They have found a metal fitting from a sword or a bayonet scabbard that gives us confidence that the remains are from the battle,” Greenwood explained. “It’s highly possible that there are more remains and more evidence of the battle.”

One of the limbs found had suffered catastrophic injuries, likely from a musket ball or a cannonball, according to Greenwood. “One hopes these people recovered,” he added.

Greenwood said that some 6,000 wounded men passed through the field hospital set up at the farm of Mont-Saint-Jean during and after the battle. Hundreds of amputations were performed there, which would explain the presence of an “amputation pit” nearby.

The area where the amputated limbs were found is now an orchard. Other artifacts found in the vicinity this week provide fascinating new insight into the course of the battle.

Greenwood told Fox News that it is generally accepted that the farm of Mont-Saint-Jean was about 1,970 to 2,300 feet behind the main allied frontline. However, a 6-pound French cannonball was found in the orchard, as were British and French musket balls. “We can tell the difference because they are different sizes,” he said. “They are probably from carbines fired by French cavalry – the farm, at least at one point in the battle, was surrounded by gunfire and fighting.”

On Wednesday, archaeologists also discovered a very large cannonball in a field about towards the frontline, about 600 to 900 feet from the farm. The 6-inch French howitzer shell, complete with fuse, still contained gunpowder. “We had to inform the police – this morning, the army bomb disposal took it away,” Greenwood said.

With this summer’s excavation at the site about to end, the bones are being placed in the care of the local Belgian archaeological authority. The trench will be sealed and the Waterloo Uncovered archaeologists will return to it next summer.

The fuse hole in the howitzer shell discovered at the Battle of Waterloo site. (Photo by Chris van Houts.)

Waterloo Uncovered is a U.K.-based charity where groups of veterans and serving personnel from the British and Dutch Armies work on the famous battle site with archaeologists and volunteers. The project serves as a support program for the veterans suffering from the likes of P.T.S.D. “It’s part of their recovery,” Greenwood explained.

In a separate project, the first complete Battle of Waterloo skeleton was identified in 2015 as a German soldier.

One of the key figures in European history, Napoleon remains a source of fascination. Last year an extremely rare ‘bicorne,’ or two-pointed hat, that was worn by the French leader at the Battle of Waterloo was sold at auction in France for $325,000.