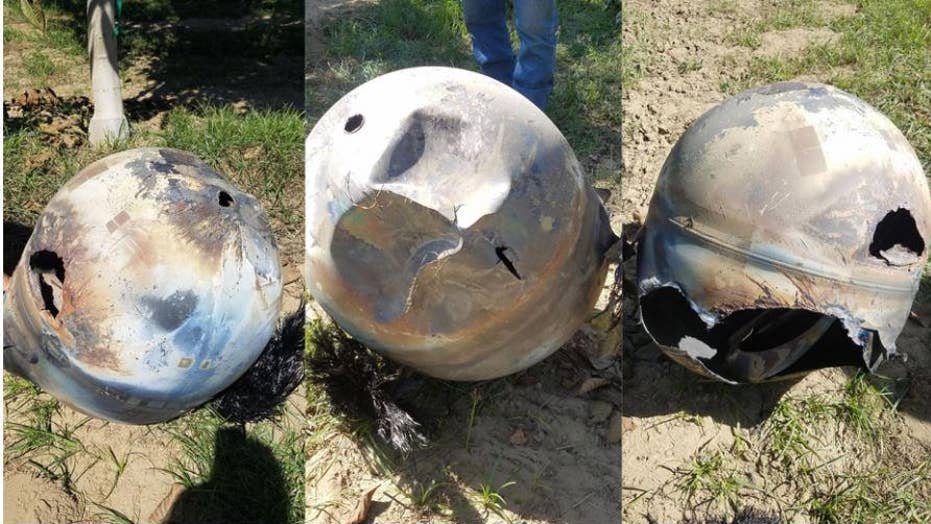 A debate over a mysterious space object that landed on a California ranch has been identified.

California residents were stunned to watch a fireball of space junk shoot across the sky and fall onto a nearby ranch last week. Videos of the bizarre sight quickly spread across social media — with many wondering what the debris was and where exactly it came from.

The owner of the ranch near Hanford spotted the big chunk of metal in his walnut orchard on Oct. 13 and alerted local authorities. Detectives with the Kings County Sheriff's Office followed several leads, including the possibility the object was related to the SpaceX Falcon 9 rocket which launched from Vandenberg Air Force Base several days prior. SpaceX denied the debris had anything to do with the launch.

"I am fairly certain not from us. The tanks are too short, the liner looks like different material, and it also looks like it went through an orbital reentry," a SpaceX vice president previously told Fox 26.

The European Space Agency also told the news station the object wouldn't be from any of its launches from Vandenberg Air Force Base, as it specifically sends objects flying over bodies of water to prevent debris from dropping into communities.

After nearly a week of searching for clues, officials finally got an answer.

The Vandenberg Air Force Base told Kings County Sheriff's deputies the object was most likely a fuel tank that detached from a communications satellite owned by Iridium, a satellite communications company, called Satellite #70. The company confirmed to officials the object was, in fact, from one of their satellites that launched into space in the late 1990s and slowly re-entered Earth's atmosphere, the sheriff's office said in a statement to Fox News.

"The purpose of this particular tank was to store fuel used to change the orbit of the satellite in space," the Kings County Sheriff's Office said.

Iridium said the tank needs to be examined before they can officially confirm it belongs to the decades-old satellite.

"I can certainly say that we recognize the possibility that it could be from SV70," Iridium spokesman Jordan Hassin told Fox News. "If it does, in fact, turn out to be from our satellite, the only thing it could be is the fuel tank and it would be the first piece of a deorbited satellite from Iridium ever recovered (as in didn't completely burn up in the atmosphere)."

Hassin said they're just starting their analysis to figure out whether it belongs to Iridium.