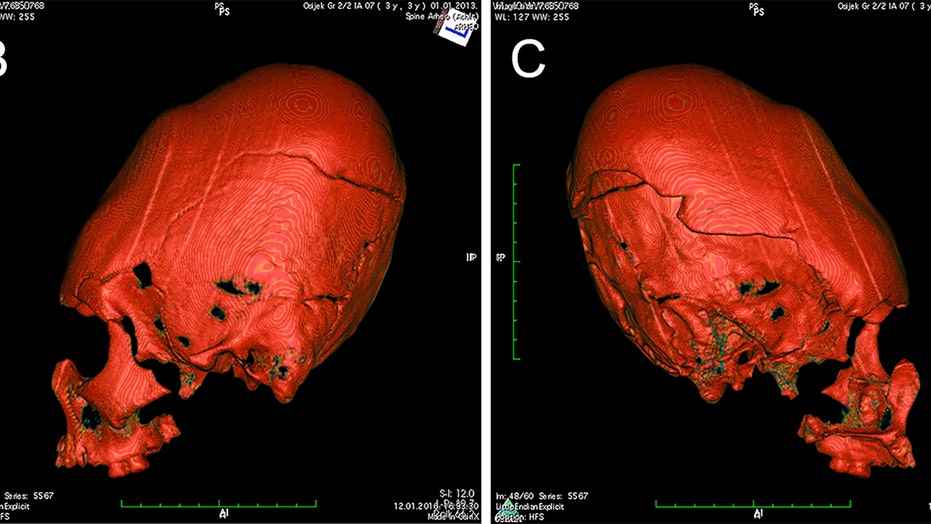 The discovery of pointy and lengthened skulls in Croatia is shedding new light on the region’s strange ancient rituals.

Experts studied three skulls excavated from a pit in Osijek, in eastern Croatia, in 2013. The skeletons, which were dated to the 5th and 6th centuries B.C., were found to be the remains of three adolescent males. Experts, however, were intrigued by the unusual shape of two of the skulls.

Their paper on the skulls was published in the journal Plos One.

"We were inspired to study these individuals based on their unusual burial context as well as the identification of two different types of artificial cranial deformation in two of the individuals," said Daniel Fernandes, a postdoctoral fellow at the Department of Evolutionary Anthropology, University of Vienna and one of the two lead authors of the study, in a statement.

Experts explained that one skull had been “lengthened obliquely” and another had been “compressed and heightened.” The research also revealed that the skeletons came from very different regions.

The three individuals bore evidence of severe malnutrition. Experts say that the deliberate deformation of their skulls may have been a way to distinguish their cultural identities.

The elongated skull (without the facial region) (© M. Novak/Institute for Anthropological Research)

"Artificial cranial deformation is a deliberate act performed on infants with the aim to achieve a desired skull shape using boards, pads or specially-made headdresses," explained Kendra Sirak, a postdoctoral fellow Harvard Medical School and the other lead author of the study. Researchers note that the practice was typically used to denote status, nobility, or affiliation to a specific class or group.

The skulls, which date from 415 to 560 B.C., are from an era known as the Great Migration Period when there was great movement and contact across a number of European cultures.

“We propose that the type of artificial cranial deformation may have been a visual indicator of membership in a specific cultural group,” said Mario Novak, a bioarchaeologist at the Institute for Anthropological Research in Zagreb and a senior author of the study, in the statement. The discovery indicates that the different groups were interacting closely in parts of Central and Eastern Europe, he added.

The elongated skull during the excavation. (© D. Los/Kaducej Ltd)

Other projects in Europe are also revealing the secrets of centuries-old burial sites. Archaeologists, for example, are shedding new light on a mysterious medieval skeleton that was discovered buried with a sword, ax and knives at Prague Castle during the 1920s.

The burial pit where the skeletons were found (© D. Los/Kaducej Ltd)

In another project, an incredible grave in Sweden containing the skeleton of a Viking warrior, long thought to be male, was recently confirmed as female.