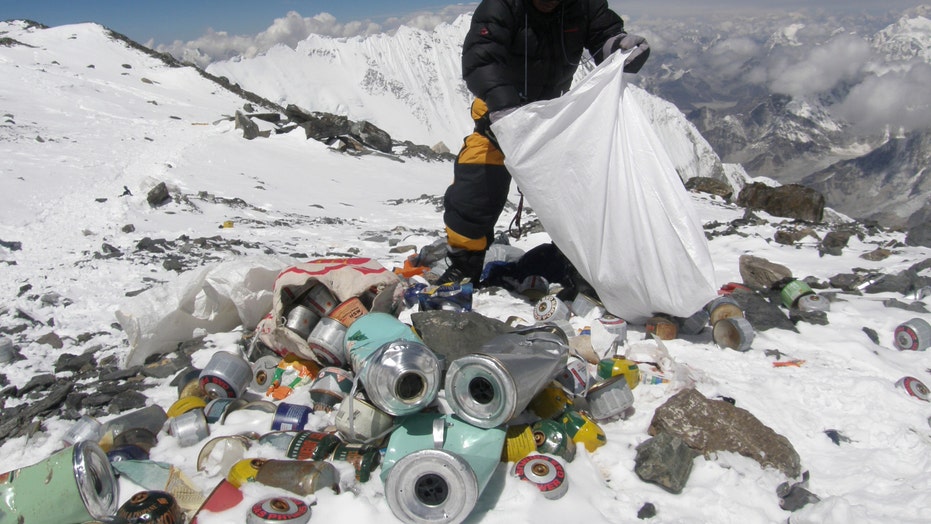 Officials in Nepal concerned about trash on Mount Everest are implementing a ban on single-use plastics at the famous mountain, AFP reports.

The ban in Khumbu Pasang Llamu rural municipality, where Everest is located, will come into force in January 2020, according to AFP. The new ruling covers drinks in plastic bottles and all plastic with a thickness of less than 30 microns (0.03 millimeters).

The report notes that over 50,000 visitors a year, including climbers and trekkers, travel to the region.

Everest’s trash problem has been in the spotlight recently. In June officials confirmed that a cleanup campaign on the mountain had removed over 24,000 pounds of garbage. The 8,850-meter (29,035-foot) summit remains littered, they said.

The remains of four climbers were also found on Mount Everest.

File photo - This picture taken on May 23, 2010 shows a Nepalese sherpa collecting garbage, left by climbers, at an altitude of 8,000 meters during a clean-up expedition at Mount Everest. (NAMGYAL SHERPA/AFP/Getty Images)

Earlier this year the BBC reported that melting glaciers on Mount Everest are revealing the bodies of dead climbers, sparking concern from the organizers of expeditions to the famous peak.

Overcrowding has also become a major concern as growing numbers of climbers attempt to scale the deadly mountain.

A Nepal government committee formed after a bad mountaineering season on Mount Everest recently recommended requiring climbers to have scaled tall peaks, undergone proper training, and possess certificates of good health and insurance that would cover rescue costs if required.

A report by the committee said people must have successfully climbed a peak higher than 6,500 meters (21,320 feet) before they can apply for a permit to scale Mount Everest. Each climber would also be required to have a highly experienced guide.

Of the 11 people who died during the spring climbing season this year, nine were climbing from the southern side of the peak in Nepal, making it one of the worst years on the mountain. Nepal issued a record 381 permits to climb Everest in 2019, up from 347 last year when 563 climbers scaled the peak from Nepal’s southern side.

The government was criticized for allowing too many climbers on the world's highest peak.

Mountaineering authorities were also criticized for not stopping inexperienced climbers who had difficulty coping with harsh conditions on Everest and slowed down other climbers on the trail to the summit.