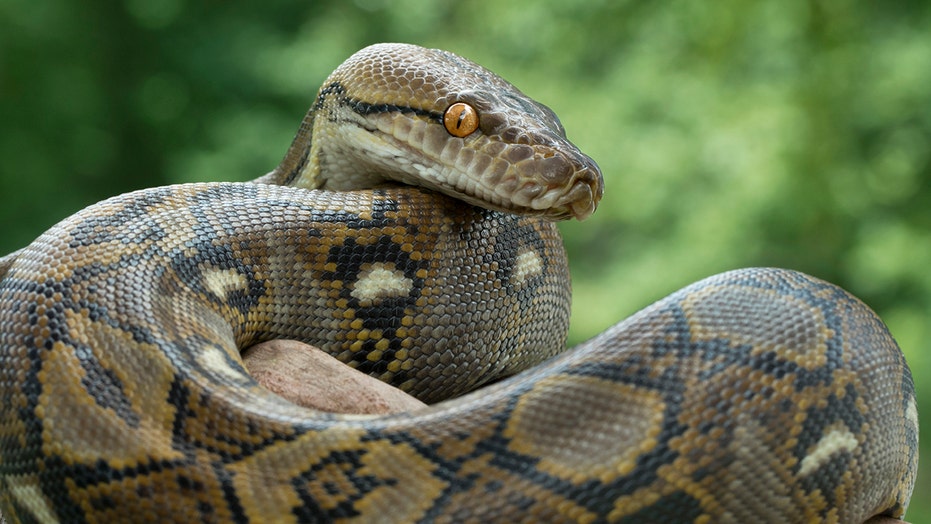 Warning: Disturbing images. Watch as Australian veterinarians pull an entire beach towel from the belly of a family's pet python.

The Small Animal Specialist Hospital (SASH) in Sydney, Australia helped to solve what they called the case of "The Missing Beach Towel" this week when they pulled an entire multi-colored, fruit-themed beach towel from the belly of a family's pet python.

"We see all kinds of interesting cases in our Avian and Exotics Department, but it's not every day we see something quite as unusual and as extraordinary as this case," SASH wrote in a statement on Facebook.

Monty, the snake in question, is an 18-year-old female Jungle Carpet Python who weighs about 11 pounds and stretches out to nearly 10 feet long.

Apparently, Monty was hunting for a late-night snack when she ate the towel.

"She has never done anything like this before," a SASH spokeswoman told Yahoo News.

To extract the towel from her, veterinarians -- including Dr. Olivia Clarke -- took radiographs to confirm the cloth's location within the serpent, who was then anesthetized for the procedure. Next, they used a flexible endoscope to see the end of the towel and forceps were placed through the endoscope to grab the fabric.

The process was caught on video.

"Wow," they could be heard exclaiming. "Oh my God!"

"Once we had a good grip, the towel was able to be carefully removed from the gastrointestinal tract with endoscopic guidance," SASH wrote. “This was a life-saving procedure. If we had not been able to remove the towel, Monty would not have survived.”

Fortunately for all, the vets managed to pull out the entire towel "unharmed" and the episode ended with "smiles all round."

Monty was discharged from the hospital on the same day and her owner reported that she was "back to her happy, hungry self."