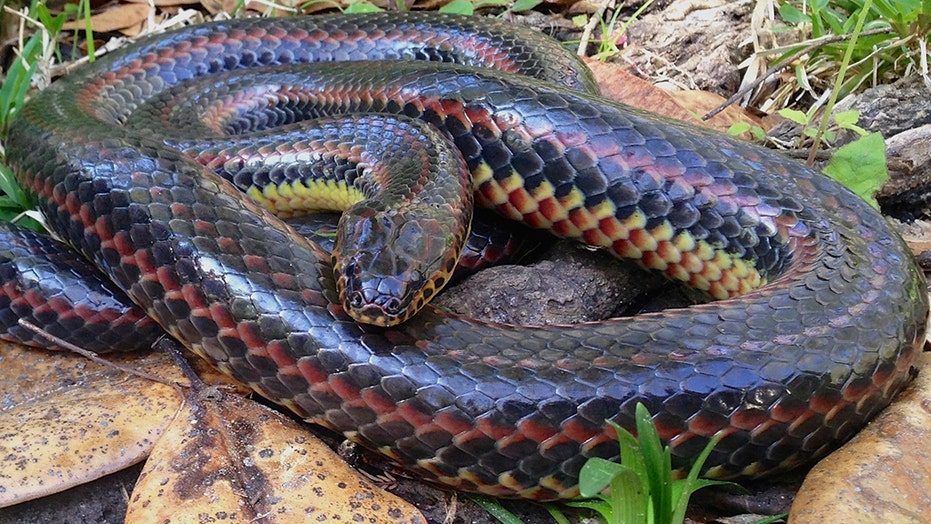 A rare rainbow snake was spotted slithering through a Florida forest last week, marking the first time in 50 years the multicolored serpent has been seen in the area, experts said.

Pictures show the reptile’s iridescent blue-black scales with stripes of red and pink along its sides and yellow streaks closer to its belly.

Rainbow snakes are known as much for their coloring as they mysterious habits. (Tracey Hale Cauthen)

Cauthen’s find marked the first recorded sighting of the snake in Marion County since 1969, the Florida Museum of Natural History confirmed to the FWC.

One theory of why this rainbow snake made a rare appearance on land is because it was forced from its normal habitat at a nearby reservoir. (Tracey Hale Cauthen)

The nonvenomous species is a highly-aquatic snake, and is also referred to as an “eel moccasin” after its penchant for eating eel, the agency said. The serpents live much of their lives hidden under floating vegetation and burrowing near creeks, lakes, marshes and tidal flats.

The snakes usually go unseen because they hide under floating vegetation or burrow underground near the shore. (Tracey Hale Cauthen)

This subterranean behavior makes the species an uncommon sight, even for herpetologists, those who study amphibians and reptiles, the agency said.

FWC biologists believe this snake made a rare appearance because a recent drawdown of the Rodman Reservoir forced it out of its normal habitat.

A rainbow snake, like the one pictured above, was spotted in Ocala National Forest for the first time since 1969. (Jonathan Mays / Florida Fish and Wildlife Conservation Commission)

Adult rainbow snakes can grow between 40 to 50 inches, according to the Florida Museum of Natural History. If captured, the snake might retaliate using its pointed tail. But experts say the tail is harmless and cannot break the skin on a human hand.

While the snake can be found along the coast from Louisiana to Maryland, most sightings in Florida occur throughout the Panhandle and northern peninsula, according to the museum.