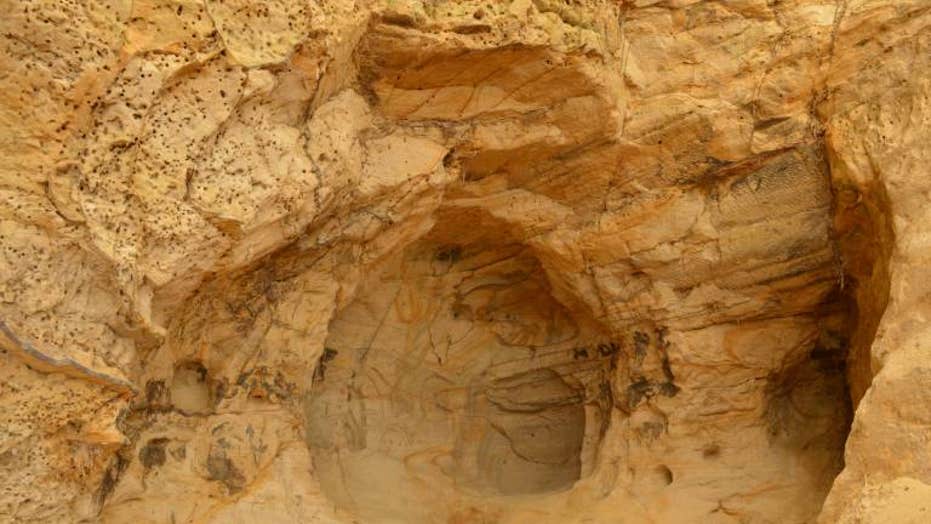 Rail workers in the U.K. have discovered a mysterious cave containing the remains of a medieval shrine.

The discovery was made after a landslide near Guildford in southern England. Rail workers making repairs uncovered the shallow sandstone cave, which contained carvings and engravings thought to date back to the 14th century.

Experts from Archaeology South-East went to the cave and analyzed the site, which is thought to be a shrine or hermitage linked to the nearby medieval church of St. Catherine.

"The cave contained what appear to be shrines or decorative niches, together with carved initials and other markings,” a spokesperson for Archaeology South-East said in a statement.

The main niche is 2.3 feet high and a Calvary Cross is carved nearby. Black marks on the ceiling of the cave are thought to be soot from medieval lamps.

The cave was discovered by rail workers following a landslide. (Archaeology South-East)

Archaeologists think that the site may also be linked to cult activity that pre-dates the nearby church of St. Catherine.

"The old name for St Catherine's Hill is Drakehull 'The Hill of the Dragon,' so this has obviously been a site of ritual significance long before the construction of the church on the top of the hill in the late 13th century,” the spokesperson said. "Work is under way to [analyze] soot and charcoal found inside the cave, which will hopefully tell us more about how and when it was used."

The U.K. continues to shed new light on its rich history. Last year, for example, a medieval stone carving of a 12th-century queen was discovered at an Abbey in southern England.

The main niche within the cave. (Archaeology South-East)

In 2017, archaeologists in London uncovered the lost remains of Greenwich Palace, the birthplace of Henry VIII and Elizabeth I.