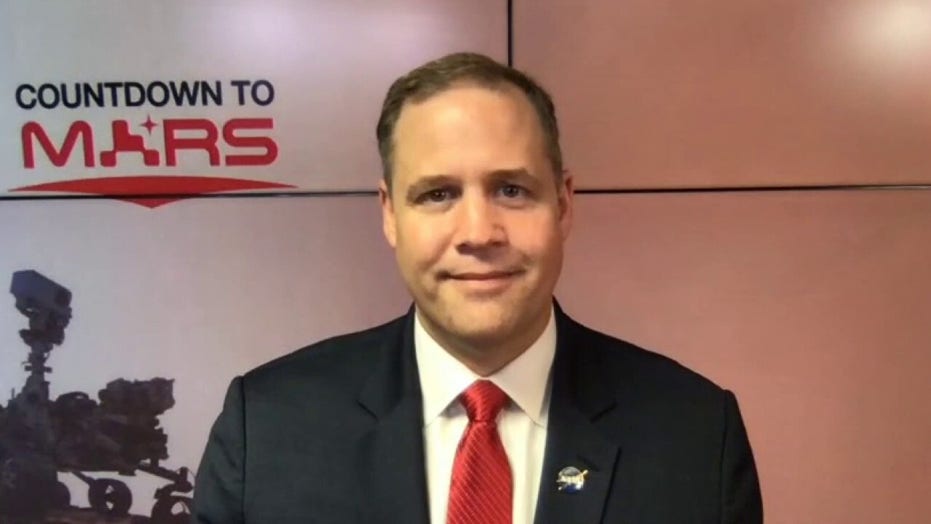 After it was delayed three times to iron out issues, NASA's Perseverance rover is slated on July 30 to head to Mars, where it will perform a number of tasks, including looking for fossilized evidence of extraterrestrial life.

The $2.1 billion rover will also come with the first helicopter, known as Ingenuity, that will let researchers understand the viability and potential of heavier-than-air vehicles on the Red Planet. NASA’s long-term goal is to send a manned mission to Mars in the 2030s.

Once Perseverance lands on Mars at the Jezero Crater on Feb. 18, 2021, it will join the still functioning Curiosity rover and the now-deceased Opportunity rover on the Red Planet.

The Multi-Mission Radioisotope Thermoelectric Generator for NASA'S Mars 2020 Perseverance rover is shown during a fit check with the rover in a payload processing facility at NASA's Kennedy Space Center in Florida on April 16-17, 2020. (Credit: NASA/JPL-Caltech/KSC/DOE)

Similar to its predecessors, Perseverance is being powered by a nuclear energy system known as Multi-Mission Radioisotope Thermoelectric Generator (MMRTG), thanks to the Department of Energy. However, using nuclear power isn't anything new for NASA.

"From preparing astronauts for cratered terrain to building boxes for moon rocks to providing electricity from nuclear sources, I’m proud to say that we’ve lent our unique expertise for exploration of the solar system," Gordon-Hagerty added.

Fox News recently spoke to DOE Under Secretary for Science Paul Dabbar to discuss the department's role in the Perseverance rover and he's hoping from NASA's latest launch.

These answers have been lightly edited for brevity and clarity.

Fox News: Talk a little about the DOE's involvement with the Perseverance rover and how long that goes back.

Paul Dabbar: The Department’s Office of Nuclear Energy with Idaho National Laboratory, Los Alamos National Laboratory and Oak Ridge National Laboratory have supported the Mars 2020 mission since 2014 when they were tasked to construct the multi-mission radioisotope thermoelectric generator and its plutonium fuel to power the Perseverance rover. DOE’s partnership with NASA to provide radioisotope power systems goes back to the 1960s as part of the Apollo missions.

Fox News: I know the DOE is "powering" the rover using nuclear energy, the MMRTG system, but what are the benefits to that compared to other systems?

Dabbar: Radioisotope power systems provide unique benefits over other power because they provide a steady power source in parts of the solar system that are dark or dusty. RPS have a proven track record of exceeding mission life. A great example are the previous Mars rovers – Spirit, Opportunity and Curiosity. Spirit and Opportunity used Radioisotope Heater Units with a mission life of 7 and 14 years respectively, significantly longer than the 3-month primary mission lifetime. Curiosity is powered with an MMRTG and is still going strong 7 years, over 3 times the primary mission timeline. The two longest-operating radioisotope power system missions are Voyager I and II, which are still in operation 43 years later.

Fox News: Perseverance has several tasks, including looking for fossilized remnants of extraterrestrial life, as well as looking at mineral composition of the rock and soil on the Red Planet. Are there any specific tools the DOE has given NASA to help complete these tasks?

Dabbar: The SuperCam was designed, built and tested at DOE’s Los Alamos National Laboratory in partnership with the French space agency, Centre national d'études spatiales. SuperCam uses laser-induced breakdown spectroscopy to study mineral composition, hardness and texture of Martian rocks and soils and will search for organic compounds related to Mars' geologic past.

Fox News: Is there anything specifically you're hoping will come out of the rover's findings and how that could potentially help us on Earth?

Dabbar: Scientific user facilities supported by DOE’s Office of Science have been invaluable in supporting characterization of materials returned from NASA space missions. This includes using X-ray and electron imaging to study the form and shape of rock samples and various spectroscopy techniques to reveal the chemical composition. The Perseverance rover will be collecting samples during the mission that could be returned to Earth in the future for further analysis, ultimately contributing to the mission's science goals of improving our understanding of Martian geology and looking for signs of ancient Martian life.