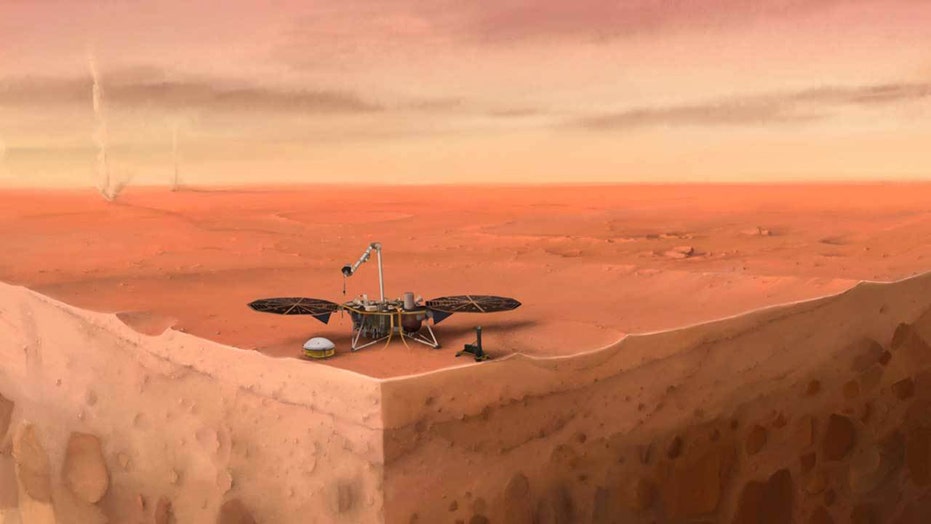 In April 2019, NASA's InSight lander recorded what at the time was believed to be the first-ever "Marsquake." Ten months later, the rover has found that Mars is a lot more active than first thought.

A series of research studies published in Nature Geoscience and Nature Communications reveals that InSight's seismometer tool (Seismic Experiment for Interior Structure or SEIS) discovered 174 "marsquakes" in the time period ending September 2019, 20 of which had magnitudes of 3 or 4. To date, "more than 450 seismic signals to date, the vast majority of which are probably quakes," including the largest at a 4.0 NASA added in a statement on its website.

In this artist's concept of NASA's InSight lander on Mars, layers of the planet's subsurface can be seen below and dust devils can be seen in the background. (Credit: IPGP/Nicolas Sarter)

"By the end of 2019, SEIS was detecting about two seismic signals a day, suggesting that InSight just happened to touch down at a particularly quiet time," NASA wrote in the statement. "Scientists still have their fingers crossed for 'the Big One.'"

Speaking to reporters on a conference call, InSight principal investigator at JPL Bruce Banerdt said that researchers have finally established the Red Planet is "seismically active," adding that it has greater seismic activity than the moon, but less than Earth.

The two largest quakes detected by NASA's InSight appear to have originated in a region of Mars called Cerberus Fossae. Credits: NASA/JPL-Caltech/Univ. of Arizona.

Most of the 'quakes that are being discovered on Mars happen at depths between 30 and 50 kilometers, the studies note, significantly deeper than most earthquakes. Discovering and recording these 'quakes will let experts understand what Mars's interior is like. Mars does not have tectonic plates, but rather "volcanically active regions" that cause them, where lava once flowed some time in the past 10 million years.

"It's just about the youngest tectonic feature on the planet," NASA JPL planetary geologist Matt Golombek said of the young lava flows. "The fact that we're seeing evidence of shaking in this region isn't a surprise, but it's very cool."

In addition to the marsquakes, InSight discovered thousands of passing whirlwinds, known as "dust devils," when they pick up dirt and are visible. "This site has more whirlwinds than any other place we've landed on Mars while carrying weather sensors," said Aymeric Spiga, an atmospheric scientist at Sorbonne University in Paris, in the statement.

InSight, which landed safely on the Red Planet in November 2018 after "seven minutes of terror" due to the agency's inability to control the landing of the spacecraft, is continuing the scientific legacy of NASA's Apollo missions.

Costing $828 million, the InSight lander is the space agency’s first probe to reach the Red Planet in six years, following the August 2012 landing of the Curiosity Rover. The unmanned probe, which is built by Lockheed Martin, will dig deeper into the planet than anything that's come before.

The InSight (Interior Exploration using Seismic Investigations, Geodesy and Heat Transport) mission, which is managed by NASA’s Jet Propulsion Laboratory, will provide scientists with a wealth of data. “The landing will kick off a two-year mission in which InSight will become the first spacecraft to study Mars' deep interior,” explained NASA, on its website. “Its data also will help scientists understand the formation of all rocky worlds, including our own.”

The lander had originally been scheduled to blast off in March 2016, but NASA suspended its launch preparations when a vacuum leak was found in the craft’s prime science instrument.