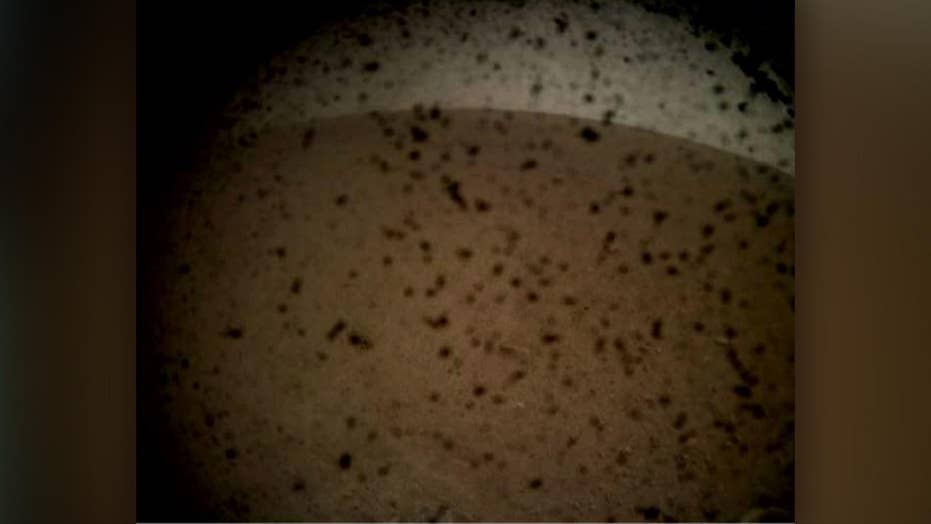 Jubilation at JPL Mission Control in Pasadena, California as the probe survives risky landing on Mars.

NASA announced that its Mars InSight lander landed successfully on the surface of the Red Planet, ending a journey that lasted six months and more than 300 million miles.

The InSight lander entered Mars' atmosphere just shortly after 2:40 p.m. EST on Monday and touched the surface at approximately 2:54 p.m. EST. The last part of the journey was the most harrowing, with NASA calling it "seven minutes of terror" due to the agency's inability to control the landing of the spacecraft, which cost $828 million. The anxious final moments of the lander's journey ended when a NASA official declared "touchdown confirmed!" sparking scenes of celebration at mission control in the agency's Jet Propulsion Laboratory in Pasadena, Calif.

"It's a unique experience - incredible," said the space agency's Administrator Jim Bridenstine, during a livestream NASA interview shortly after the landing. "In Sight could provide some really good information about whether there's liquid water on Mars."

Vice President Mike Pence also tweeted his congratulations to NASA and its partners after InSight reached the Martian surface. "Incredible milestone!" he wrote.

Chris Carberry, executive director of Explore Mars, a non-profit organization that aims to advance the goal of sending humans to Mars within the next two decades, said the landing spells good news for future exploration of the Red Planet.

“With the successful landing of InSight, NASA continues its streak of remarkable successes on the Martian surface and in orbit,” Carberry told Fox News, via email. “In addition to gaining better understanding of the origin of terrestrial planets and how seismically active Mars currently is, this is yet another important step that we hope will lead to humans landing on Mars starting in the 2030s.  To make that happen, NASA, international partners, and the industry need assure that we continue to launch robotic precursor missions to Mars in the 2020s and find ways to utilize the Moon to advance our goals on Mars.”

As the InSight lander descended, it was hit with extreme temperatures, speeds and forces. In an attempt to prevent any damage to the craft, NASA chose a "vanilla ice cream" landing site, the Elysium Planitia, which is flat and featureless.

"We can't joystick the landing, so we have to rely on the commands we pre-program into the spacecraft. We've spent years testing our plans, learning from other Mars landings and studying all the conditions Mars can throw at us,” said Rob Grover, InSight's entry, descent and landing (EDL) lead, based at NASA's Jet Propulsion Laboratory in Pasadena, California, in a recent statement. And we're going to stay vigilant till InSight settles into its home in the Elysium Planitia region."

On Sunday, NASA engineers successfully tweaked the probe’s trajectory, steering the spacecraft within a few miles of its targeted entry point over the Red Planet.

"While most of the country was enjoying Thanksgiving with their family and friends, the InSight team was busy making the final preparations for Monday's landing," said Tom Hoffman of JPL, InSight's project manager, in a statement released Sunday. "Landing on Mars is difficult and takes a lot of personal sacrifices, such as missing the traditional Thanksgiving, but making InSight successful is well worth the extraordinary effort."

Now that it is safely on the surface, the real excitement begins, according to Lori Glaze, acting director of the Planetary Science Division at NASA Headquarters. "Once InSight is settled on the Red Planet and its instruments are deployed, it will start collecting valuable information about the structure of Mars' deep interior - information that will help us understand the formation and evolution of all rocky planets, including the one we call home," she said.

The InSight Lander is the space agency’s first probe to reach the Red Planet in six years, following the August 2012 landing of the Curiosity Rover. The Rover, which has more than 12 miles on its odometer, is currently the only thing operating on the Martian surface. The Opportunity Rover, which was launched in July 2003, is currently inoperable thanks to a dust storm the Red Planet experienced several months ago.

The unmanned probe, which is built by Lockheed Martin, will dig deeper into the planet than anything that's come before.

InSight (Interior Exploration using Seismic Investigations, Geodesy and Heat Transport) is also the first spacecraft to launch to another planet from the West Coast. The spacecraft blasted off from Vandenberg Air Force Base in Central California on May 5, 2018 atop a United Launch Alliance Atlas v 401 rocket.

NASA’s last landing on Mars took place in 2012 when the Curiosity Rover reached the Red Planet. The Rover, which has more than 12 miles on its odometer, is currently the only thing operating on the Martian surface.

The InSight mission, which is managed by NASA’s Jet Propulsion Laboratory, will provide scientists with a wealth of data. “The landing will kick off a two-year mission in which InSight will become the first spacecraft to study Mars' deep interior,” explained NASA, on its website. “Its data also will help scientists understand the formation of all rocky worlds, including our own.”

The Lander had originally been scheduled to blast off in March 2016, but NASA suspended its launch preparations when a vacuum leak was found in the craft’s prime science instrument.

HOW NASA'S MARS INSIGHT WILL PHONE HOME AFTER ITS DRAMATIC LANDING

InSight is being followed to Mars by two mini-spacecraft that comprise NASA’s Mars Cube One (MarCo), the first deep-space mission for CubeSats, or tiny satellites. If MarCO makes its planned Mars flyby, it will attempt to relay data from InSight as it enters the planet’s atmosphere and lands, according to NASA.

The United States is the only country to successfully operate a spacecraft on the Martian surface. InSight represents NASA's ninth attempt to put a spacecraft on Mars; only one effort failed.

The space agency's older, smaller Opportunity was roaming around up there until June, when a global dust storm knocked it out of service. Flight controllers haven't given up hope yet that it will be revived.

Last week the space agency announced that it has selected the location where its Mars 2020 Rover will land on the Red Planet. The Rover is expected to land on Mars Feb. 18, 2021.