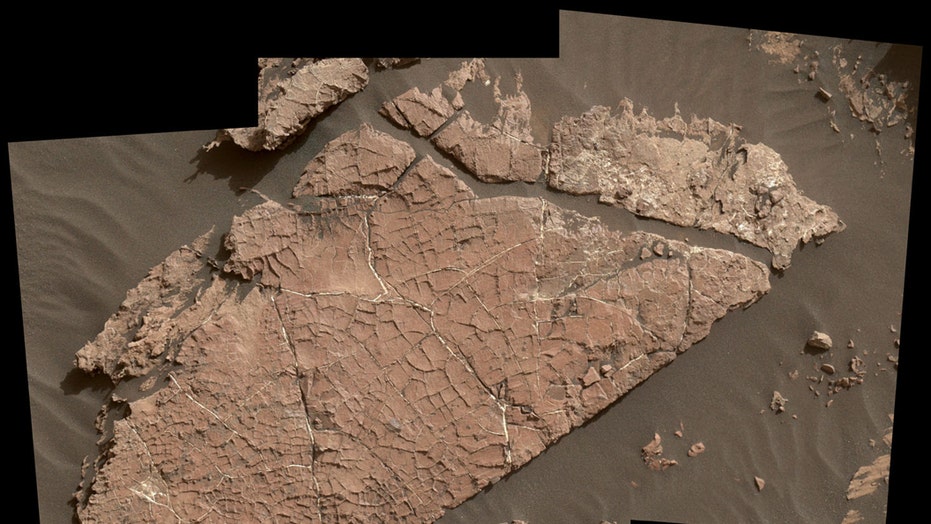 NASA's Curiosity rover has discovered evidence of an oasis on Mars more than 3 billion years ago, leaving scientists to wonder whether the Red Planet was capable of supporting life.

The research, published in Nature Geoscience, looks at data Curiosity has collected from the Gale Crater, the 150-mile-wide basin the rover is exploring. The scientists behind the study pointed out the rocks that are enriched with mineral salts as evidence of "shallow briny ponds that went through episodes of overflow and drying," according to a statement from NASA’s Jet Propulsion Laboratory.

"We went to Gale Crater because it preserves this unique record of a changing Mars," said the study's lead author, William Rapin, in the statement. "Understanding when and how the planet's climate started evolving is a piece of another puzzle: When and how long was Mars capable of supporting microbial life at the surface?"

The network of cracks in this Martian rock slab called "Old Soaker" may have formed from the drying of a mud layer more than 3 billion years ago. The view spans about 3 feet (90 centimeters) left-to-right and combines three images taken by the MAHLI camera on the arm of NASA's Curiosity Mars rover. (Credit: NASA/JPL-Caltech/MSSS)

The Gale Crater, which is believed to be between 3.5 and 3.8 billion years old, serves as a reminder of the difference between Mars' climate then, which was wet, to the desolate, arid climate it has today.

Mars once had a very wet surface, covered in wide, raging rivers. Water may be the lifeblood of our planet, but it's unclear whether Mars ever supported (or still supports) life.

Rapin and his team analyzed the salts they found in a 500-foot-tall section of sedimentary rocks known as "Sutton Island," visited by Curiosity in 2017.

He speculated that Sutton Island could have looked like the saline lakes that are seen on South America's Altiplano, believed to be influenced by the climate in the same way Gale was. "During drier periods, the Altiplano lakes become shallower, and some can dry out completely," Rapin added. "The fact that they're vegetation-free even makes them look a little like Mars."

The next steps for researchers will be to understand how long it took for Gale Crater to go from a shallow, briny lake to the arid, desolate region it is now.

"Finding inclined layers represents a major change, where the landscape isn't completely underwater anymore," said team member, Chris Fedo, in the statement. "We may have left the era of deep lakes behind."

This animation demonstrates the salty ponds and streams that scientists think may have been left behind as Gale Crater dried out over time. The bottom of the image is the floor of Gale Crater, with the peak being the side of Mount Sharp. (Credit: ASU Knowledge Enterprise Development (KED), Michael Northrop)

"We can't say whether we're seeing wind or river deposits yet in the clay-bearing unit, but we're comfortable saying is it's definitely not the same thing as what came before or what lies ahead," he added.

The Curiosity rover, which celebrated its seventh anniversary on the Red Planet in August, has made several remarkable discoveries, including finding "unusually high" levels of methane and a "shiny" object believed to be a meteorite.