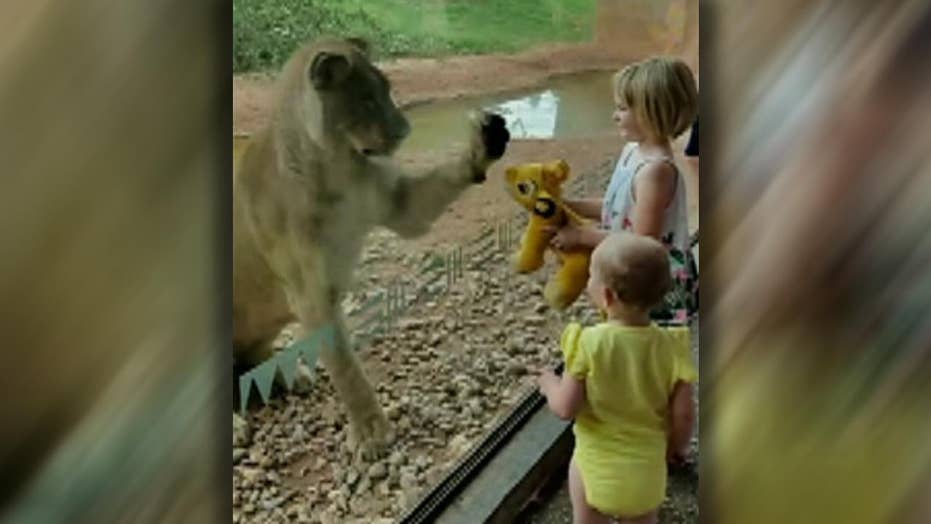 A lioness at the Oklahoma City Zoo reacts to a little girl's stuffed toy.

This big cat wasn’t "lion" around.

Moto, a lioness at the Oklahoma City Zoo and Botanical Gardens was caught on camera following around a child’s toy on Saturday.

Mila Chandler was carrying around a toy version of “The Lion King” character Simba during a trip to the zoo on her fifth birthday.

Facebook user Mary Jo Keltch Robertson posted a clip of the lioness' reaction to the stuffed animal on her page Saturday.

“The highlight of Mila’s day,” she captioned the video, which has racked up more than 111,000 views as of Wednesday afternoon.

RATTLESNAKE TERRIFIES NORTH CAROLINA BOATERS AS IT SWIMS ACROSS LAKE, ATTEMPTS TO SLITHER ABOARD

Chandler's mother, Leslie, has insisted the clip showing her daughter wasn’t ill-spirited, despite some critics claiming the young girl was teasing the animal.

“I feel like if they had been there, they would’ve understood it was not mean,” she told KOTV. “She was not trying to tease the animal or taunt it in any way. She wasn’t being mean.”

Chandler continued, “She just had her toy with her. She just needed her little stuffed animal to get through the morning. And this just happened.”

The zoo has also addressed the now-viral animal encounter.

“There’s no movement involved. There’s no smell involved. I think we have often times made papier-mâché items and we hide treats inside of them and so if anything, it might be, here’s a novel thing, I wonder what’s inside,” he said.

Drees doesn't believe the girl was in any way teasing the creature.

The lioness "could leave at any time, so it really doesn’t fall in the taunting category for me," he said.