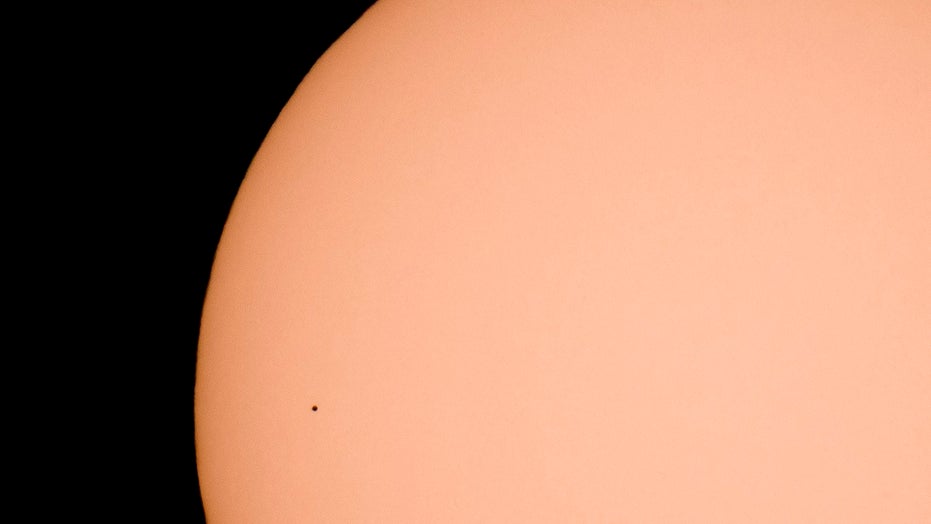 Even though it currently has temperatures approaching 800 degrees Fahrenheit during the day and nearly -300 degrees at night, a new study suggests there is a small chance that the planet Mercury could have supported life.

The research, published in the journal Scientific Reports, notes the planet's surface is not caused by the result of quakes, but rather "volatiles," which can switch elemental states rather quickly.

"For nearly half a century, it was considered that these terrains formed due to catastrophic quakes and ejecta fallout produced by the antipodal Caloris basin impact," researchers wrote in the study's abstract.

This image taken Nov. 8, 2018, at 1:12 a.m. EST comes from the Parker Solar Probe's WISPR (Wide-Field Imager for Solar Probe) instrument. It shows a coronal streamer, a bright structure that develops over active regions of the sun. The bright point near the image's center is Mercury. (NASA/Naval Research Laboratory/Parker Solar Probe)

"Currently documented evidence of surface modifications due to the removal of volatiles includes Mercury’s hollows, which are shallow, flat-floored, irregular, rimless depressions with bright interiors, and halos," they added. "These features are relatively small, exhibiting an average depth of 24 ± 16 m13. Therefore, their origin is thought to represent minor mass losses produced by the local sublimation of near-surface geologic material that included large volumes of volatiles (i.e., volatile-rich compounds)."

Speaking with The New York Times, one of the study's co-authors, Jeffrey Kargel, said he thought his co-researcher, Alexis Rodriguez, was wrong. Upon further review, he realized the idea wasn't so outlandish.

“It is possible that as long as there was water, the temperatures would be appropriate for the survival and possibly the origin of life,” Kargel told the news outlet.

The planet Mercury transits across the face of the sun, as seen from Kekesteto, Hungary's highest mountain peak, Monday, Nov. 11, 2019. Stargazers used solar filtered binoculars and telescopes to spot Mercury, the solar system's smallest, innermost planet, as a tiny black dot as it passed between Earth and the sun on Monday. (Peter Komka/MTI via AP)

“I thought Alexis had lost it at some point,” he added. “But the more I dug into the geologic evidence and the more I thought about the chemistry and physical conditions there, the more I realized that this idea — well it might be nuts, but it’s not completely nuts.”

Rodriguez, who is a senior scientist at the Planetary Science Institute, spends the majority of his time studying "areas of interest are related to the study of the Martian subsurface hydrology."

It's believed Mercury's icy regions are slightly different than those seen on the Moon, according to an August 2019 study on the topic.

"We showed Mercury’s polar deposits to be dominantly composed of water ice and extensively distributed in both Mercury’s north and south polar regions," Nancy Chabot, instrument scientist for MESSENGER’s Mercury Dual Imaging System, said in August. "Mercury’s ice deposits appear to be much less patchy than those on the moon, and relatively fresh, perhaps emplaced or refreshed within the last tens of millions of years."