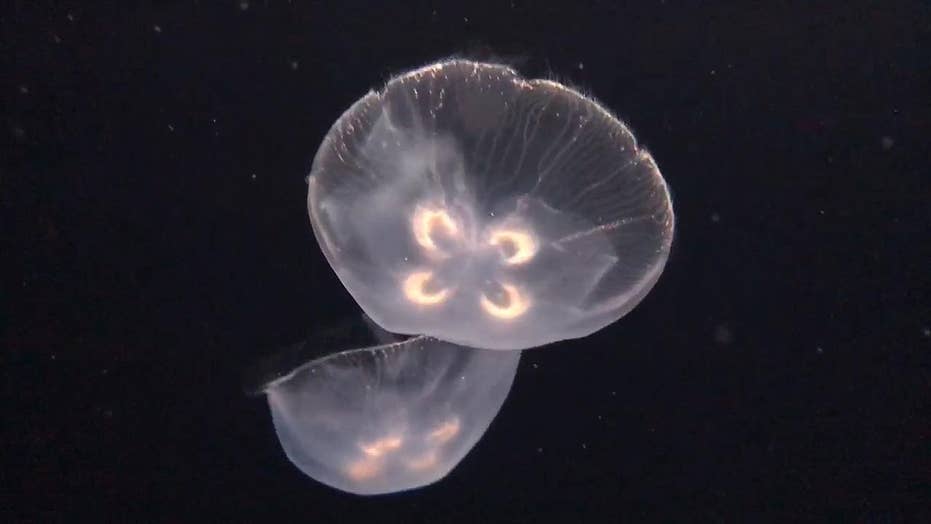 Jellyfish are thriving along US coastline

After more than 1,000 people were stung by jellyfish at a Florida beach, scientists explain why the sea creatures are so prevalent along U.S. shorelines and in other places around the world

BILOXI, Miss. – If you’re heading to the beach this summer like millions of other Americans, scientists are recommending to be on the lookout for jellyfish.

More than 1,000 people were stung on a Florida beach just this week, and it is possible incidents may increase.

Allen Collins, a research zoologist with the National Marine Fisheries Service, says there have been more blooms of jellyfish in different parts of the world, but scientists are unsure if this is a worldwide event.

JELLYFISH STINGS CAUSES HUNDREDS OF FLORIDA BEACHGOERS TO BE TREATED

A Portuguese man o’ war washed up on a beach in Gulf Shores, Ala. Found in sub-tropical waters, the man o’ war is known for its excruciatingly painful sting. (Luciano Chiaverano)

“When conditions are right for them to make jellies, they produce the jellyfish in vast quantities,” Collins said. “People have studied the jellyfish in certain areas quite well and there are instances where it does look like there’s one particular region is having greater numbers of jellyfish. In the literature sometimes people describe it as a global phenomenon and on that we’re just not sure.”

Jellyfish blooms are known to occur every 20 years, but Collins says warmer oceans, agriculture runoff, commercial fishing and the creation of artificial reefs may have an impact on increased numbers of the animals in recent years.

Collins also said places like the Gulf of Mexico and the Mediterranean Sea are prime places for jellyfish blooms. He also noted that there are thousands of different species of jellyfish and countless others that have yet to be discovered.

The majestic creatures are some of the oldest life forms on the planet, having existed for hundreds of millions of years. With no eyes and limited ability to move through water, marine biologists say it’s important recognize the habitat of the animals and know what to do when you encounter them at the beach.

“With the warmer temperatures there’s more people in the water so there’s a bigger chance of people getting stung,” said Shannon Howard, a marine biologist at the South Carolina Aquarium.

Howard says that if you get stung, you should get immediately out of the water and use vinegar to neutralize the tentacles before trying to remove them.

Scientists also say there’s no evidence that urine helps alleviate the pain from a jellyfish sting.

Luciano Chiaverano, a research scientist at the University of Southern Mississippi, says most jellyfish stings occur during the spring, summer and fall, when people are most active on beaches. He also says despite being demonized by humans, jellyfish do have their place in the ecosystem and play a pivotal role amongst creatures of the sea.

“They’re not there just to sting people,” Chiaverano said. “There’s a lot of species in the ocean from fish, birds, to crabs, to snails that actually feed on jellyfish. Jellyfish are also known to provide some shelter for juvenile fish.”

Chiaverano hopes people take a second look at jellyfish and learn to respect instead of fearing them.