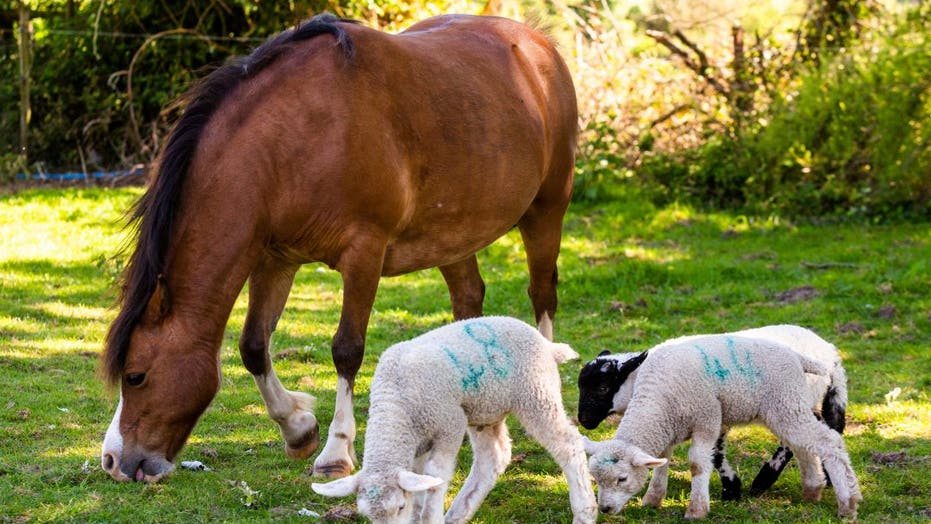 This gives new meaning to the phrase "modern family."

The pony, named Heidi, started to take care of the trio after their mother died and has even fed them on occasion, said Becky Popham, who keeps Heidi in her field in Somerset, England.

Heidi the pony is looking after three orphaned at a farm in Somerset.

"I put them in with her because she wasn't worried about them," Popham said of the three four-week old lambs, who are named Prince, Dewdrop and George. "Heidi started by lying down with them and from there they started standing under her. She then started licking them and she's producing a little bit of milk to feed them."

The lambs are also bottle-fed three times a day, added Popham, who has three daughters of her own.

While a bit unusual, it's just a quirk of nature, Popham's veterinarian told her.

"I ran it past the vet and he said it’s absolutely fine, and it’s just one of those random things of nature," Popham, 33, added.

Ten-year-old Heidi took on the care of the young trio of lambs following the death of their own mother-- and even feeds them.

"Her maternal instincts have just kicked in," Popham added.

It may be an odd thing to see a horse care for sheep, with Popham describing it as "so rare," but Heidi is no stranger to caring for young. Five years ago, she had a foal herself.

Congrats to the happy family.