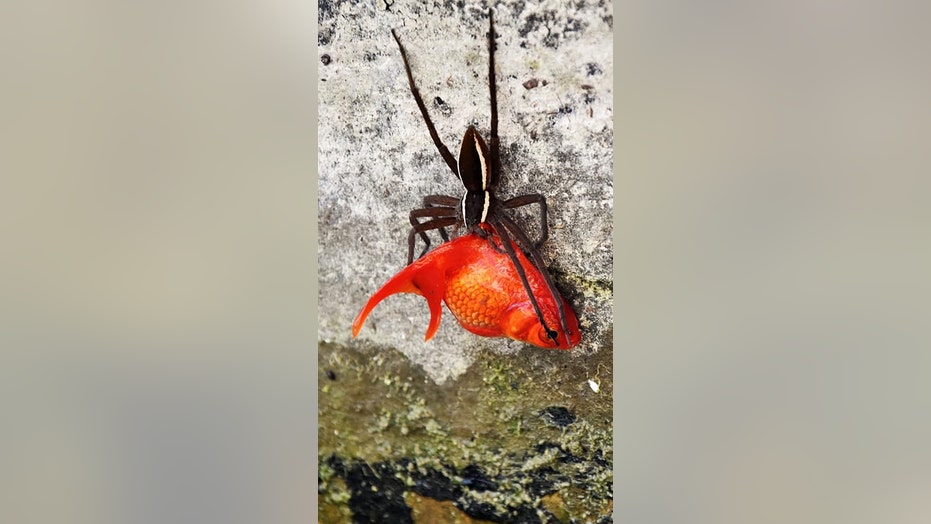 Now there's something you don't see every day.

A South African man was attempting to impress his new date with his pet goldfish, Cleo, only to be stunned when a giant nursery web spider snatched the unsuspecting fish out of its pond and carried it away, The Sun reports.

Jérémy Schalkwijk was getting ready to show the fish, located in his pond in Barberton, South Africa, to Athina Yalias, when the spider lowered itself into the pond and used its fangs and front legs to carry the fish away. Stunned, Schalkwijk captured photos of the incredible event.

A pet owner was left gobsmacked when he tried to show off his goldfish to his date - only to discover a spider hauling it out of the pond in its teeth. (Credit: Kennedy News)

"It was a crazy, crazy sight. You don't see that every day," Schalkwijk, 33, said in comments obtained by The Sun. "I couldn't believe that a spider would be able to carry something twice its weight like that."

"I've never seen something like that before," Schalkwijk, who was on his second date with Athina, added. "I knew [the spiders] could fish, but never such a large size. You see it sometimes with small fish like fingerlings, but never with a goldfish. This was twice the weight of the spider."

After showing the photos to Athina, whom Schalkwijk said was "so impressed," the couple returned to see what the spider would do next. Unsurprisingly, neither the spider or Cleo were anywhere to be found, Schalkwijk added.