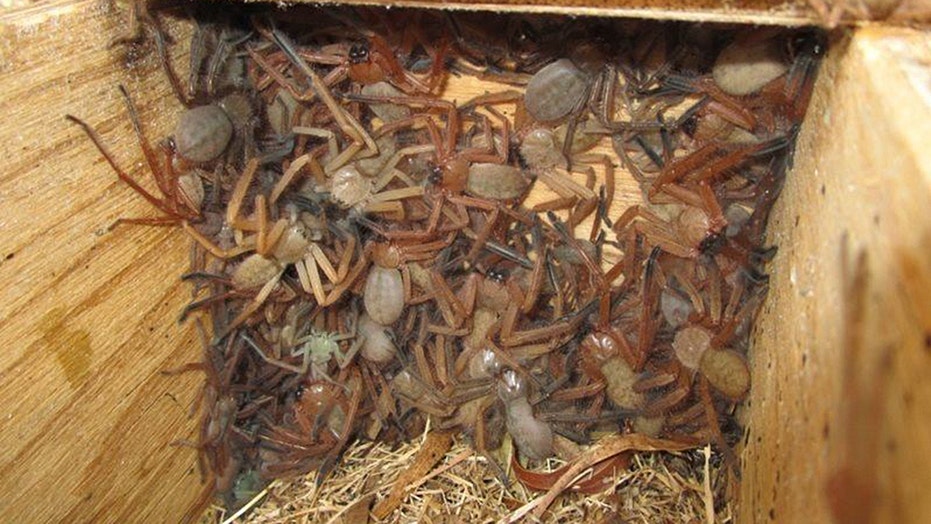 A rare photo has emerged of a colony of huntsman spiders living together in nest boxes originally built for pygmy possums.

Non-profit organization Bush Heritage Australia published the photo of the group of arachnids on its blog, noting that they quickly moved into the boxes shortly after they were built.

"It all started about the same time we were finding Pygmy Possums in the boxes, but on lifting the lids of some we found many huntsman spiders of all sizes whizzing around inside," the non-profit wrote on its website.

"We now know that they're a species of huntsman that live together, normally under the bark of trees," Bush Heritage continued. "In the restored area tree bark is in short supply at present and they've found the wooden boxes suitable."

Huntsman spiders, which can grow nearly 1 foot in length, generally live in Australia, Africa and other temperate climates, according to a 2003 study.

According to the Australian Museum, these spiders, known for their size, speed and ability to hunt, can be dangerous to humans if bitten. However, attacks are rare, the museum added. Symptoms include swelling, pain, nausea and vomiting, The Sun notes.

In June, a man staying at a lodge in Tasmania, Australia, witnessed a large huntsman spider eating what appeared to be a pygmy possum.

These spiders have also been known to take up residence in people's homes. In August, an Australian woman posted photos of a giant huntsman spider lurking in her home on Facebook before it was safely removed.