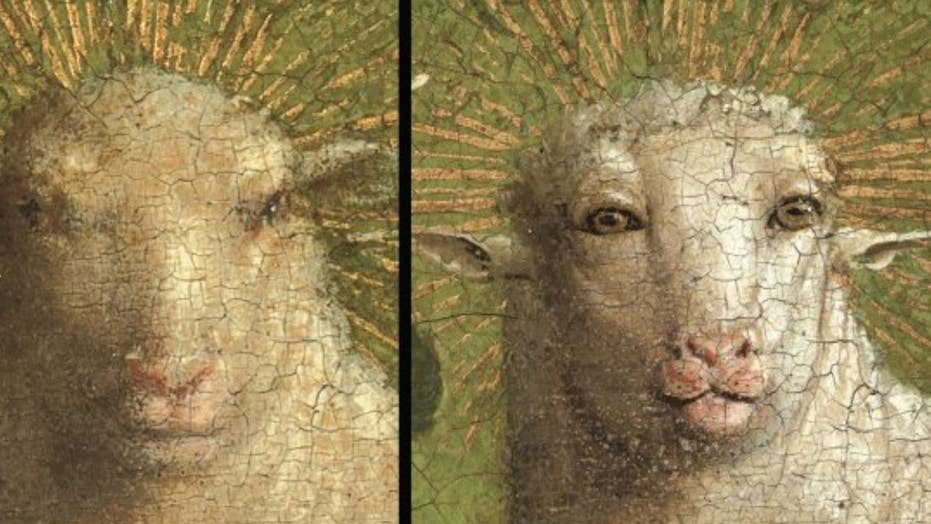 The restoration of a prized 15th-century painting has revealed the human-like face of a lamb, surprising art critics and prompting a debate online.

The Ghent Altarpiece, which was completed in 1432 and is housed at St. Bavo's Cathedral in Ghent, Belgium, is a large and complex painting that has captured the imagination of the art world for many years.

The multimillion-dollar project to restore the painting, considered a masterpiece of European art, began in 2012 and is being led by Belgium's Royal Institute for Cultural Heritage (RICH). The painting has been dismantled, stolen and damaged many times over the years, but the restoration revealed some unique attributes.

Researchers discovered that the central panel of the artwork, which is officially known as the Adoration of the Mystic Lamb and was created by brothers Hubert and Jan van Eyck, had been painted over some time in the 16th century, according to multiple media reports.

The original lamb has a more “intense interaction with the onlookers,” Hélène Dubois, who is heading up the restoration project, said in an interview with the Art Newspaper.

Dubois explained that more research was needed into the lamb's "cartoonish" appearance, which seems to depart in style from the rest of the painting.

A picture taken on December 17, 2019 shows a detail of the restored original of 'Adoration of the Mystic Lamb' altarpiece (1432) by the brothers and Flemish artists Hubert van Eyck and Jan van Eyck at the Museum of Fine Arts Ghent in Ghent, Belgium. (KENZO TRIBOUILLARD/AFP via Getty Images)

The restored lamb, which is meant to represent Jesus Christ, prompted a wide range of responses from art historians and others.

"But perched atop its fluffy woolly-white body, the penetrating, close-set eyes, full pink lips and flared nostrils of the original lamb are, at a minimum, eye-catching, if not alarmingly anthropomorphic," wrote Smithsonian Magazine.

"Ok, new Ghent lamby is cute and all but the lamb in the Ghent Altarpiece is famous because it's so omniscient and sort of mean looking?" art historian and writer Shannon Stirone said on Twitter. "I have mixed feelings about this iconic creature turning into something that looks like it's about to tell you that you left the fridge door open."

However, in statements to the BBC, the Royal Institute for Cultural Heritage defended the restoration and the lamb's appearance.

"Several posts on social media reflect a misunderstanding of the results," the institute explained. The Van Eyck brothers chose to "represent the Lamb of God with human-like staring eyes," which was a common style in the Middle Ages.

The third phase of the restoration has not yet begun, but visitors to the Museum of Fine Arts in Ghent can see the pieces of the artwork that have already been touched by conservators -- and gaze into the unique-looking lamb's eyes.