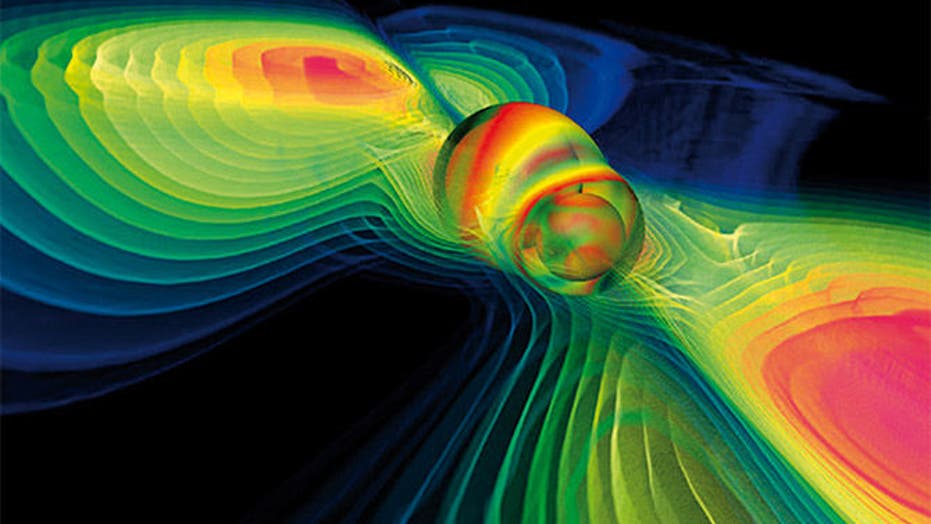 A mysterious deep space event could have stretched and squeezed Earth last week.

Astronomers observed a split-second burst of gravitational waves on Jan. 14, but they can't figure out precisely where the burst came from.

These waves are disturbances in space-time that are generally caused by accelerated masses, such as black holes or neutron stars, colliding with each other.

WILL TITANIC'S SUNKEN WRECK BE PROTECTED? TREASURE HUNTERS ARE NOT SURE

A computer simulation showing gravitational waves during a black-hole collision. The discovery has major implications for science. (MPI for Gravitational Physics/W.Benger-Zib)

The burst still "seems a little too short for what we expect from the collapse of a massive star," he said. "On the other hand, we've never seen a star blowing up in gravitational waves before, so we don't really know what it would look like."

The scientist, who is also an adjunct faculty member in physics at the University of California Santa Barbara, suggested that the burst could be from two intermediate-mass black holes having merged.

Researchers are now pointing their telescopes to that same region to pinpoint the wave's source.

"The universe always surprises us," Howell added. "There could be totally new astronomical events out there that produce gravitational waves that we haven't really thought about."