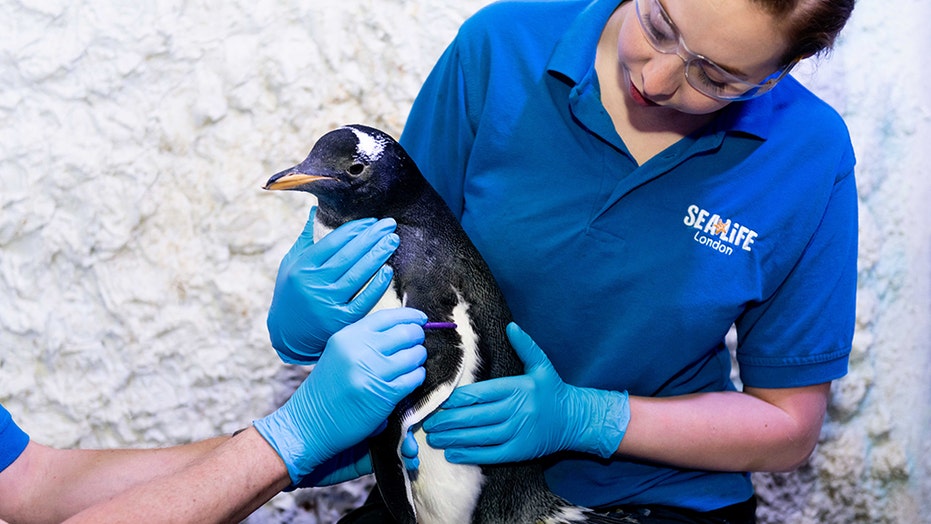 A baby penguin being raised by a same-sex penguin couple at an aquarium in the U.K. will be brought up without a gender — the first in aquarium history.

The young gentoo penguin, which has not yet been named, "will be the first of its kind in the history of the famous London aquarium not to be characterized as male or female," according to Sea Life London.

Newborn penguins typically have a name that relates to its gender at birth, the aquarium said in a press release obtained by Fox News. But aquarists "decided it was more natural for the chick to grow and develop into a mature adult as genderless which is normal in the wild until they mature."

In the meantime, the penguin has been tagged with a purple band.

It's "completely natural for penguins to develop genderless identities as they grow into mature adults," according to Graham McGrath, general manager of the aquarium.

The penguin, pictured here with its purple armband, has not yet been named, according to the aquarium.  (Sea Life London Aquarium)

“What makes us really proud at the aquarium is the success of SEA LIFE London's Gentoo breeding program and the amazing job of same-sex penguins Rocky and Marama who took the chick under their wing and raised it as their own," McGrath said.

Rocky and Marama made headlines earlier this year when they adopted the genderless chick. The aquarium told Insider in July the penguin couple has "an "incredibly strong bond" and adopted the egg together.

Described as "highly nurturing," gentoo penguins have been considered "near threatened" by the International Union for Conservation of Nature since 2007.