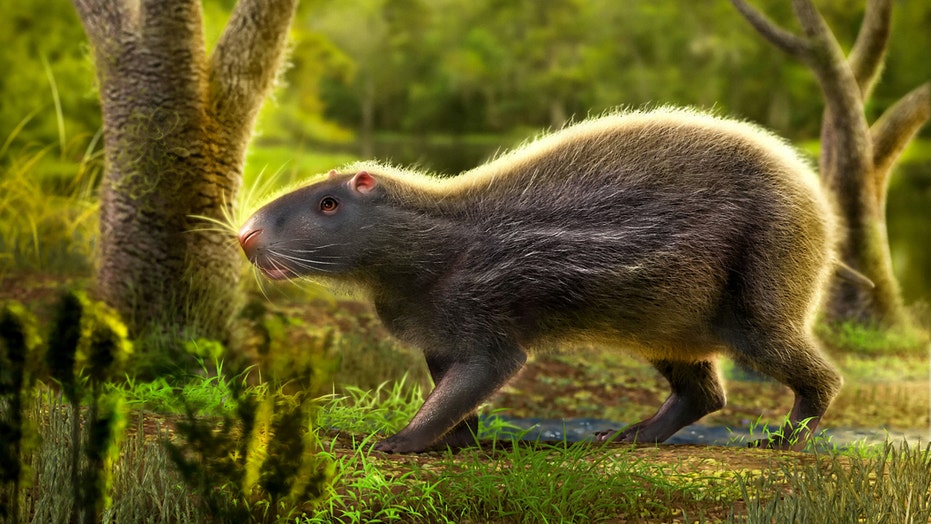 Archaeologists have discovered fossils of an enormous, prehistoric rat that was the size of a human years ago in South America.

Known as Neoepiblema acreensis, the 10-million-year-old rat weighed approximately 180 pounds and had two, gigantic curved incisor teeth on its 5-foot frame that were used to crack nuts and eat prey, researchers wrote in a study. For comparison purposes, the modern brown rat is less than one foot in length and weighs approximately 8 ounces.

The discovery of the two skull fossils was found in the western Brazilian Amazon.

A giant prehistoric rat as big as a human that lived in the Amazon rainforest 10 million years ago has been unearthed by scientists. (Credit: SWNS)

Despite its great size, N. acreensis wasn't very smart, the researchers discovered, with a CT scan to show its brain likely weighed just 4 ounces. "Although Neoepiblema was one of the largest rodents ever, the brain of this giant rodent was very small relative to its body mass," the study's lead author, Jose Ferreira, said in an interview with British news agency SWNS.

The researchers noted that despite its great size, N. acreensis had a "very low encephalization quotient compared to other rodents," according to the study's abstract.

An encephalization quotient (EQ) is the way to measure the difference between an expected size of an animal and the actual size of its brain. Humans have an average EQ of approximately 6, while most rodents in South America have an EQ of 1.05. N. acreensis had an EQ of just 0.3.

It's likely that the rodent did not need a large brain looking for active predators, due to its surroundings. "When Neoepiblema inhabited South America, carnivorous placental mammals such as felids, canids and ursids had not yet arrived on the continent, since the Isthmus of Panama was not yet formed and there was no terrestrial connection with Antarctica," Ferreira added.

The rodent's main predators were crocodiles, who were also large in size and lived in the marshy regions of the continent, adding credence that there was no need for a large brain cavity for N. acreensis.

"Thus, predation pressures were different from what they would become from the end of the Pliocene and Quaternary when the Isthmus of Panama was formed and the large carnivores entered the continent during an event known as the Great American Biotic Interchange," Ferreira explained.

The research has been published in the scientific journal Biology Letters.

Researchers have discovered some exceptionally large prehistoric creatures in South America in recent memory. Earlier this month, experts discovered the largest turtle to ever live, the 2,500- pound Stupendemys geographicus, roamed the ancient seas in greater ranges than previously believed.

Fossilized remains of the jaw and other skeleton parts were recently discovered in Venezuela and Colombia. The giant reptile, which had a shell that reached nearly 8 feet in length, was first discovered in the 1970s and is believed to have lived between 5 and 10 million years ago across the entire northern part of South America.

Separately, the fossils of a "bonecrushing" ancestor of the modern-day crocodile that hunted dinosaurs 230 million years ago were discovered in Brazil. Known as Dynamosuchus collisensis, it has been nicknamed the "T. Rex of its time."