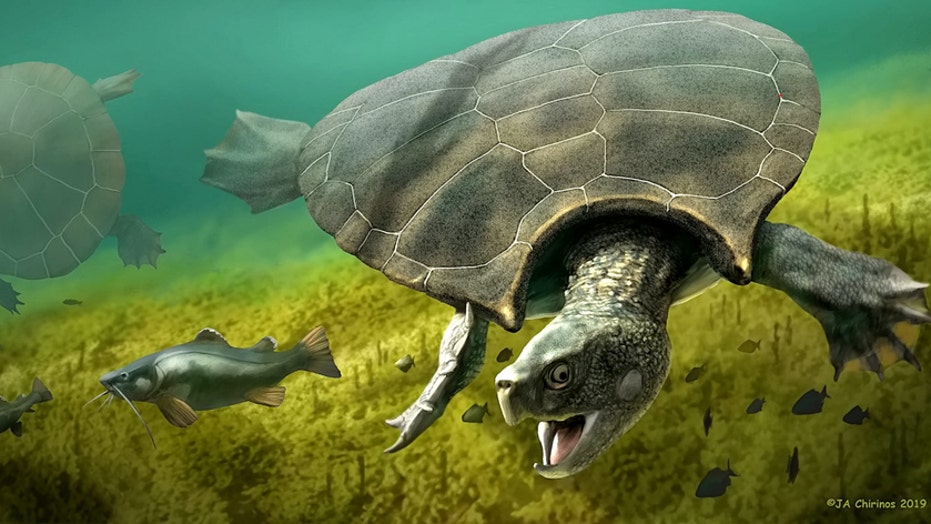 Talk about a mutant turtle.

Researchers have discovered the largest turtle to ever live, Stupendemys geographicus, roamed the ancient seas in greater ranges than previously believed, according to a new study.

Fossilized remains of the jaw and other skeleton parts were recently discovered in Venezuela and Colombia, according to a statement from the University of Zurich. The giant reptile, which had a shell that reached nearly 8 feet in length, was first discovered in the 1970s and is believed to have lived between 5 and 10 million years ago across the entire northern part of South America.

This is a graphic reconstruction of the giant turtle Stupendemys geographicus: male (front) and female individual (left) swimming in freshwater. The biggest turtle ever to have lived weighing more than a ton with an eight-foot long shell roamed modern-day Colombia 10 million years ago. (Credit: SWNS)

'BIZARRE' TURTLE MANAGED TO SURVIVE ASTEROID THAT WIPED OUT DINOSAURS

"The carapace of some Stupendemys individuals reached almost three meters, making it one of the largest, if not the largest turtle that ever existed," said Marcelo Sánchez, director of the Paleontological Institute and Museum of UZH and head of the study, in the statement.

"The now-extinct animal is the largest land turtle of all time," one of the study's authors, Edwin Cadena, told British news agency SWNS. "The remains include the biggest complete turtle shell ever identified."

The massive reptile had a shell that measured 8 feet in length and could have supported a turtle that weighed more than 2,500 pounds, the researchers noted. At that size, it is nearly 100 times the size of the closest living relative, the Amazon river turtle, and twice the size of the largest turtle today, the marine leatherback, Cadena added. Marine leatherback turtles can weigh between 550 and 1,150 pounds.

In addition to having a giant shell, the males of the ancient species had horn-like shells at the front of the upper shell, a feature that Cadena said may have been used for defense. "This is a feature that may have served to protect their massive skulls when engaged in combat with other males," Cadena said.

Cadena also believes the turtle could have reached enormous size due to its surroundings, having lived in warm wetlands. "Massive crocodiles may also have influenced the turtle's evolution, with bite marks on some specimens  — including a lone crocodile tooth protruding from a carapace," the researcher explained. "This suggests they needed protection from other lurking giants."

It's likely that S. geographicus grew to such massive size because the continent it lived on was a "lost world," containing many oversized creatures, including rats and alligators, according to fossil records.

The study has been published in Science Advances.

Ancient turtle fossils have garnered outsized attention in recent weeks. Fossils of a land turtle that survived the asteroid blast that killed the dinosaurs were recently discovered in northern France.

Known as Laurasichersis relicta, the ancient turtle has been described as "peculiar," due to some of its odd characteristics, compared with modern-day turtles. It had a shell that reached just over 23 inches in adulthood but was not able to retract its head.