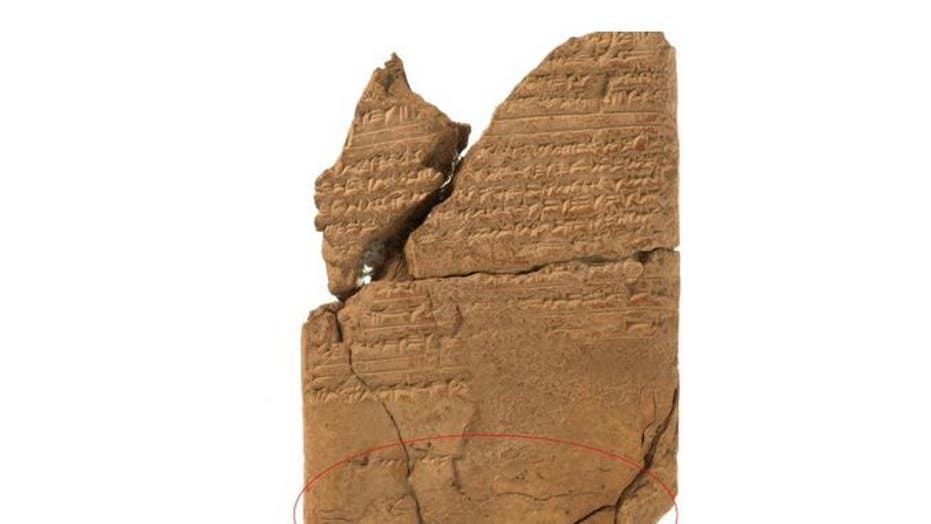 A drawing of a demon with a forked tongue was discovered on a 2,700-year-old Assyrian clay tablet.

Troels Pank Arbøll, a University of Copenhagen Assyriologist, was inspecting a tablet of ancient writing at the Vorderasiatisches Museum in Berlin when he observed the demon -- which had horns, a tail and a snake-like forked tongue -- according to Live Science.

"I was the first one to notice the drawing, despite the text having been known to researchers for decades," Arbøll told Live Science, "so it is not easily seen today unless one knows it is there due to the damage on the manuscript."

4,000-YEAR-OLD GUIDE TO EGYPTIAN UNDERWORLD COULD BE THE OLDEST ILLUSTRATED BOOK

The drawing was overlooked for decades on the tablet from the library of a family of exorcists who lived in the Assyrian city of Assur. The depiction is shown here in red. (Staatliche Museen zu Berlin - Vorderasiatisches Museum/Photo: Olaf M. Teßmer)

The science outlet reports that the tablet was in a library of a family of exorcists who lived in 650 B.C. in the city of Assur, which is in present-day northern Iraq. The tablet is written in what's known as cuneiform, a system of letters used in the ancient world.

Arbøll writes that the demon has "curvy horns, a serpent's tongue and possibly a reptile-like eye" in newly published research.

These types of portraits are exceedingly rare.

"This specific drawing is a depiction of the actual demon, instead of other comparable drawings, which generally depict a figurine made during a ritual to remove the illness," Arbøll told Live Science.