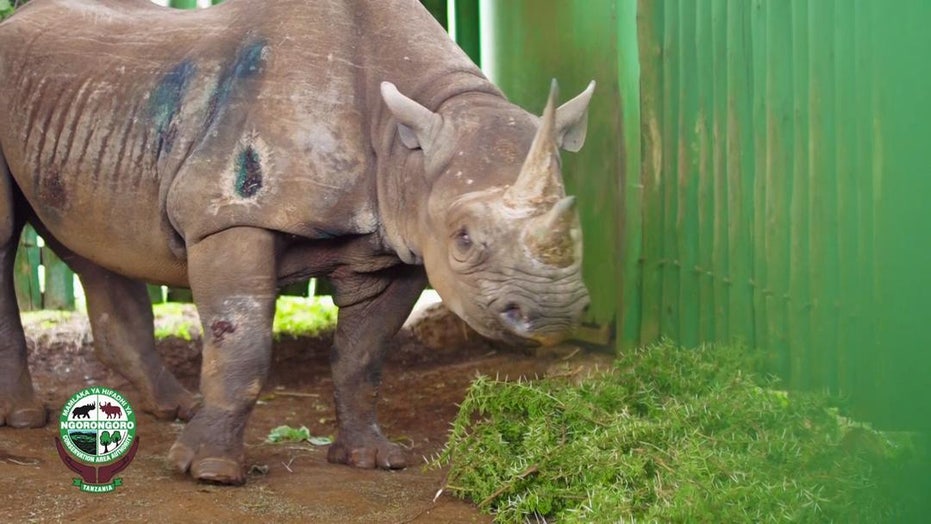 An eastern black rhino — believed to be the oldest in the world — died Friday in Tanzania, authorities said.

Fausta, a 57-year-old rhino, passed away from natural causes in the Ngorongoro Crater, part of the Ngorongoro Conservation Area Authority. She lived a free-ranging life for more than 54 years in Ngorongoro until three years ago, when she was taken into a sanctuary because of health problems.

A scientist first spotted the rhino in 1965, when Fausta was 3 or 4 years old, a Facebook post from the conservation's commissioner, Dr. Freddy Manongi, read. In 2016, the rhino's health had started to deteriorate and authorities "were forced to put the animal in captivity, after several attacks from hyena and severe wounds thereafter."

Manongi said rhinos usually live between 37 and 43 years old in the wild, and older than 50 years in captivity. He noted

FRENCH ZOO VISITORS CARVE THEIR NAMES ON RHINO'S BACK

He noted a female southern white rhino named Sana, who died in captivity in November at a French zoo at 55 years olds, was considered the world's oldest white rhino in captivity. Another rhino named Elly, the oldest-living black rhino in the U.S., died at the San Francisco Zoo in May 2017 at the age of 46.

Fausta lived a free-range life until 2016, when she was taken to a sanctuary due to health problems, officials said. (Ngorongoro Conservation Area Authority via REUTERS)

Black rhinos, according to the World Wildlife Fund, are considered a critically endangered species, with a population of over more than 5,000. Nearly half of these are located in Namibia, which is allowed under international convention to permit five male rhinos a year to be legally killed by hunters.

But despite its regrowth in population size, black rhinos are "still considered critically endangered," as poachers illegally traffick rhino horns, threaten its recovery.