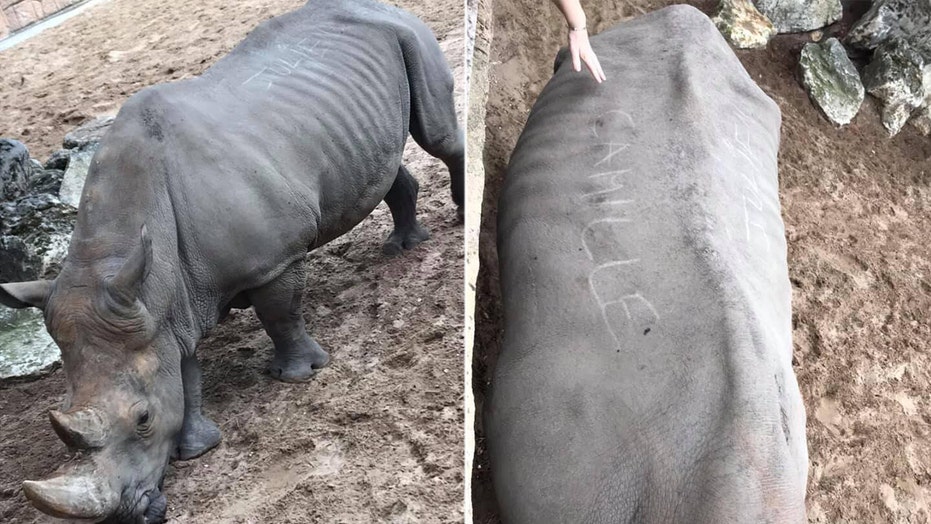 A French zoo blasted the “stupidity” of its visitors on Wednesday after some scratched their names on a rhino’s back.

Shocking photographs shared on social media showing the back of the 35-year-old female rhinoceros inscribed with the names “Camille” and “Julien” immediately sparked an uproar.

La Palmyre zoo in Royan in southwestern France released a statement saying it was “outraged by the stupidity and disrespect” of the visitors, though no legal action will be taken, reported the Agence France-Presse, an international news agency.

The zoo typically allows the visitors to touch the animals over a fence of their enclosure, claiming this creates a “moving” experience that allows the animal lovers to see “the diversity and beauty of nature.”

A French zoo blasted the “stupidity” of its visitors on Wednesday after some scratched their names on a rhino’s back. (Royan News)

Zoo director Pierre Caille told the news outlet that the visitors used their nails to engrave their names into a layer of dust, sand and dead skin on the rhino's back.

“The animal may not even have realized,” he said. “We quickly brushed the writing away and there was no harm to the animal.”

While the zoo reiterated that most visitors are respectful when it comes to touching various animals, some wildlife groups criticized the zoo for allowing “this type of interaction.”

The zoo director said some video surveillance might be installed as a result of the incident, but insisted that he doesn’t want cameras all over the zoo.